Red men in the Amazon 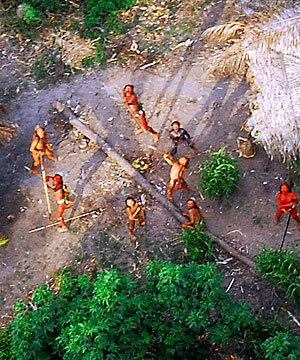 I don't normally post about things I read in the news (this blog is about me and Italy after all!) but my bel ragazzo called me to the internet before to have a read of this online and I had to share it with you! The article is written in Italian but you can still look at the photo's if you cannot understand the words. It's basically saying that an unknown tribe of 'red men' have been discovered in the Amazon between Brazil and Peru. They have been given this name as they appear to be painted in a redish body paint. These are some of the first photo's that anyone has seen of this unknown tribe and no one has any information what so ever about them as NO ONE has heard of them before or knew about their existance. The photos were taken from a plane that stumbled across a clearning in the Amazon and saw these primative looking huts and brightly coloured red people trying to throw spears at them. It would seem that these people have never had any contact with the world outside of their village. There is one person who I guess we can assume is the leader painted in black and no women can be seen in the photo's.

But fancy that - a new tribe has been discovered, I just hope that people don't go and invade them now... Apparently there are about 100 uncontacted tribes living throughout the world... SO interesting. Here is a link too I just found in English. 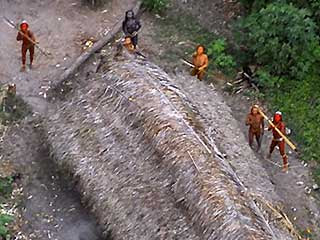 Posted by Leanne was in Italy now in Australia at Friday, May 30, 2008

I saw an interview once on Australian TV with an Aboriginal woman who had been part of a tribe which was 'discovered' in the 80s in the Northern Territory. She said that they'd heard about other Aborigines (in nearby related bands) who had gone to live in a settlement but they'd decided not to join them because their leader thought it was a bad idea. Then eventually they'd decided to join the other Aborigines at the settlement. She said life was hard when they were wandering the desert but all in all they were happier. Now most of them are overweight and have diabetes and/or alcohol problems.

I read that the plane in the Amazon had actually sought out that "lost" tribe. Sounds like soon enough they'll be invaded. :(

Hi Kataroma,
I too think they will so be invaded...Poor people who just wanted to be left alone to live their life and now they had planes fying low and taking photo's of them.
Also I know what you mean about the Aborigines. Lots of them have a bad reputation in Australia don't they since they have so many alcohol problems when it was the white man who introduced all these things.