The leaves are slowly but surely falling from their branches to the ground, the mornings in Rome have a cool, crisp edge and although it is harder here to notice the change in seasons when compared to other areas, I know that finally winter is approaching.

It has been one long, hot summer and the change in weather brings a change in work. I am still waiting to hear where I am going for the winter and I think there may be some unexpected news in store... I am not sure, I have to wait and see but I do not think that the bel ragazzo and I will be working the whole winter through. I need a break. I want a break. Some time to do nothing, recharge my batteries, perhaps some time for us to go back down to Maltio, Calabria and start working on our house. Who knows...soon hopefully I will be informed.

People often think that working in the tourist industry means non-stop fun. Sure, working in this field has its perks - less here in Rome then anywhere else, since Rome is full of tight people...but we have the odd free meal in a restaurant or hotel, I can go on as many excursions as I want with our agents. In Sicily the perks were rather plentiful and fun: we had boat cruises, free dinners when we wanted in our hotels, beach parties, restaurants, bars and clubs putting on special nights for those of us working in the industry...all free and all fun...so yes the perks can be there, but the summer season in particular is so long and so tiring.

We have had thousands of customers in Rome this summer. I was averaging 100 customers coming and going every week. That is a lot of transfers to book, a lot of hotel rooms to confirm, many complaints to handle, customers falling ill, people having to cancel holidays at the last minute and return home, missed flights, cancelled trains and planes, missing customers, people in hospital, trips to the police... My job is about being flexible. I have to be able to handle any situation that is thrown at me. I have to be on call 24/7 with my phone always by my side. And after being here in Rome, working pretty much non-stop since the start of March I am tired and ready to leave Rome behind for good.

We have a small amount of news for next summer. Bel ragazzo has been offered and has accepted Sicily for summer 2009! Since we work in different departments he is allowed to know where he is placed for the summer, while I have been told that I am in Italy for summer 09...but destination unknown until later in October. I am sure it will be Sicily, but nothing is official just yet.

So for now I am still here in Rome, not sure when I am finishing and not sure where I am going but alas...this too is part of the job.

Here are some more random pictures of Rome. May as well take as many photos as I can since I hope never to return here to live.

San Giovanni in Laterano. I was actually trying to get one of the many gypsies in the photo but you can only just make her out in the bottom right - she has a green head scarf on and is harassing some poor tourists. 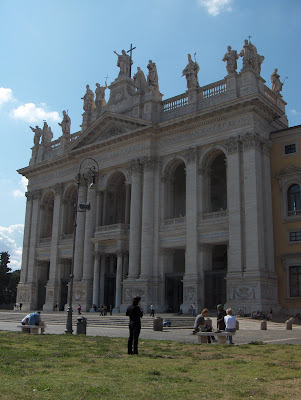 Across the road from the church I saw this red pipe and thought it was an odd place for the workers to leave a pipe. I looked a little closer and realised that it is not a boring old pipe, but it a purposefully placed pipe since there is an art gallery there. (I never knew that. See the pipe comes in handy as now I know that there is something hidden behind those walls.) 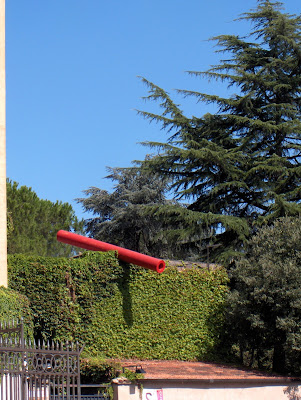 Not sure who this statue is of...I should know as the statue is facing the San Giovanni church so I think it has some significance...but I have not done my research here. 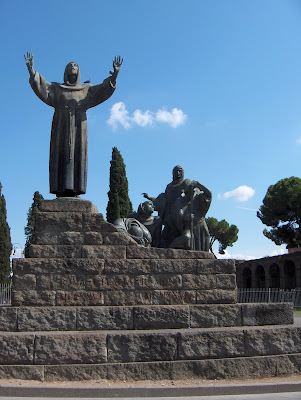 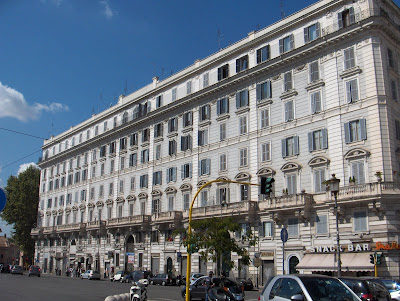 Posted by Leanne was in Italy now in Australia at Tuesday, September 30, 2008

Regards and Smiles from Bulgaria

Hi Lilia,
Glad you enjoyed the blog and the photos!

Hi again :)
You wrote that you love comments:)
Here I am -posting again.
Really a nice blog.
In fact my dream since chilhood is to visit Rome,that's why I am adminiring on these pictures.
Have a nice day :)
Lilia

It can be so frustrating waiting to find out your destination but I hope that when you do you'll have fun during your last while in rome.

This is amazing! I found you through the Aussie Bloggers forum - what a fantastic place to live!! You may be interested in today's featured blogger at Where the blog are you? www.bloggingaussie.blogspot.com The blogger loves Italy and travels

Leanne was in Italy now in Australia said...
This comment has been removed by the author.
2/10/08

Hi Red,
You are right, once I know where I am going I am sure I can relax and enjoy Rome.

Hi Louisa,
Thanks for stopping by my blog :) I will go and check out the link you recommend.

Hi Leslie,
The header and pictures are ok, but no where near as fancy as your blog :)

No Hi for me finally....Bye

Hi Lilia,
I don't understand your comment above? Thanks for visiting the blog again though. Hope you have a nice afternoon!