A city built on rock...or lava to be precise.

A few days ago when bel ragazzo was in town we made a trip into the city of Catania.

"Catania is the second largest province in Sicily, with Palermo the capital being the first. Catania's history is full of transformation as the city had the misfortune of being partly destroyed 9 times. In 1669 Mt Etna erupted on an enormous scale and destroyed much of Catania. It killed about 12,000 people and the lava flowed out to sea for about 1km. You can see on either side of the autostrada the lava from this eruption and you can also see statues of Madonne at the top of old lava which generally signifies that there was once a church in its place."  This is my weekly airport bus spiel as we transport clients to Taormina every Saturday.

We set off for a pleasant albeit hot day of site seeing. Here are some pictures of what we think is a beautiful city, however not everyone agrees. In parts it is pristine, and off the main streets it is often run down. After historic eruptions, the majority of the city was rebuilt with lava stones giving Catania a dark, secretive feeling, which makes you want to get off the tourist track and delve deeper into the residential heart. 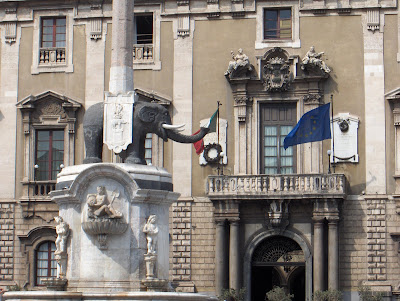 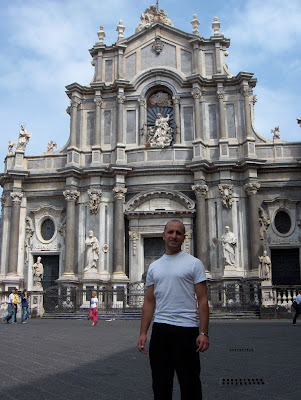 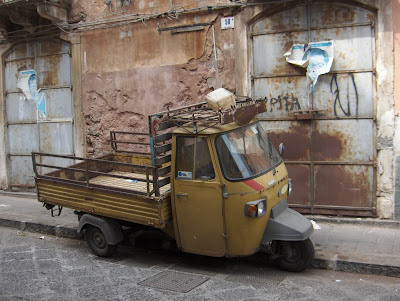 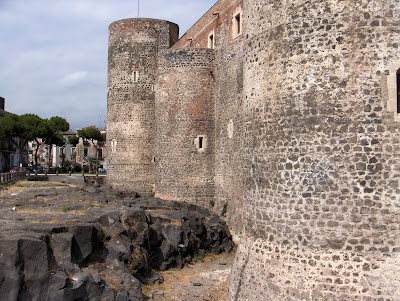 Does the photo of the castle above look strange at all? From this angle it is hard to see anything out of the ordinary, however the castle is on ground level. One would imagine that all castles are built on hill tops, with a perfect vantage point to spot incoming attacks? The odd thing about this castle is that it is built on ground level...Che pazzo! I hear you say. Yes. However it is not a crazy design, it did not use to be this way. Look closely at the photo again and maybe you can see big black lava stones by the base of the castle. Yes. You guessed it. This castle used to be on a hill top and when Etna erupted, lava came and covered everything in her path, covering the villages below which makes today's city on level with the once elevated castle.

The people who built the castle must have been annoyed when it was on a hill, then er, wasn't on a hill anymore.

I'm from Perth - which I kinda always have to explain is nowhere near Melbourne or Sydney to my Italian penpals!

Your blog is really a lot of fun and I love how you mix your thoughts and the nuances of everyday Italian life in your entries. I hope (and I'm being purely selfish here) you blog for a long time to come. :)

Getting back to your post, thanks for the pictures. I am also like you, I enjoy getting off the beaten tourist track and making my own way around places - I find you get to really know a place more that way. When I visited Rome, the day I enjoyed the most was when I ignored the tourist map I was given and just 'discovered' the streets on my own.

Hi Delina,
yes I would imagine the king of the castel was not to pleased when it was not so imposing and high up anymore!

Hi Liz,
So you are a Perth gal...never made it that far to be honest. I have heard though that the best looking Aussie men are in Perth (or maybe that was a guy from Perth who told me that...I can't remember who told me but someone did.) On my next trip back to AUS I'll have to discover some more of my own country :)