How to tell if a house is 'abusivo' 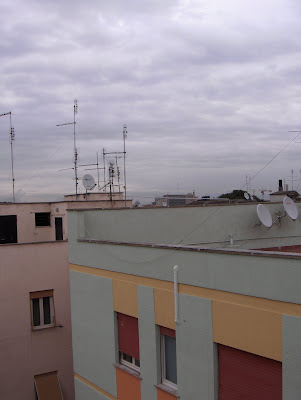 I live quite close to the centre of Rome, only 5 metro stops from the Colosseum. I do not have to pay rent, bills or anything costly like that as thankfully with my job this is all included. What isn't included however if living in a (perhaps) abusivo apartment. Abusivo is the Italian term used when a building, construction or alteration to a building has been made illegally.

I first learnt about abusivo houses when living in Taormina. Near my apartment there was a skeleton building that was perched dangerously close to the edge of the cliff (in my opinion.) As the months went by this house remained just a few pillars here and there...no one was ever seen to be working on it. I asked my colleague who told me that the house was abusivo and that sometimes you could catch work-men there during the night trying to lay some more foundations. They worked at night as obviously the house was illegal as in this case they were building the house on the council's land! My colleague told me their goal was to put the roof on the house, as once there is a roof then it is harder to knock the house down... I asked her why the government did not come and knock the house down immediately since it was illegal, and she said that there were so many of these abusivo houses that it would cost too much to knock them down. (And that also the council liked to wait until the house was finished before destroying it...then the abusivo people lose even more money.)

If you look around, you will see there are many abusivo homes in Italy (and other countries) from the Gypsy encampments that the governments are continuously bulldozing, to the odd house extension here and there that has not been authorised by the council...and perhaps my apartment here in Rome. Basically I live on the 6th floor of a large complex and the 6th floor used to be the roof top terrace. The owner built a house, apparently with the permission of the condominium but it was her who made the roof. The problem is that water leaks in one of the bedrooms, the bathroom and the living room so when it rains we have little floods all over the place. Some workmen from the condominium came to view the house today. They were muttering away in Italian (most of which I could not understand...plumbing words are not yet in my vocabulary but I did hear abusivo mentioned a few times.) saying that if the leak had been near the front door then that would be their problem, but since the leak is further away, where the owner made the roof then the problem is hers, and hers alone. I got the feeling that no one likes our land lady as we are on the 6th floor, and the lift stops at level 5. Why you ask? Because the lady would not pay the condominium fees and therefore they refused to put a lift up to our floor. 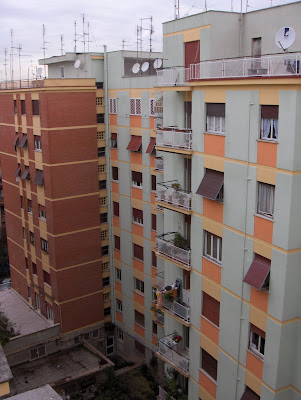 Posted by Leanne was in Italy now in Australia at Wednesday, April 02, 2008

I've heard about that ridiculous law too where once the roof is on it's "ok". Honestly.

Hi Delina,
It is ridiculous!

I hadn't heard the term 'abusivo' before, thanks for explaining. That's some crazy stuff, but am I surprised? Not quite! I certainly wonder quite frequently about building codes as I walk around Naples, though, I must say.

Actually, what really gets me is the wiring! I've posted pics a couple times on my blog of what I call 'real Italian spaghetti' because I can imagine that being an electrician here has got to be a nightmare.

Anyway, it's my first time by your blog! Nice to meet you. :)

Hi Mental Mosaic,
Nice to meet you too, I'll have to pop over and check out your blog!

Oh gosh, I think our apartment (a "mansarda") might have been abusivo at one time or might even still be abusivo. We don't have any leaks, but it's basically a little house perched on top of the building. The plumbing is pretty horrendous too.

At our old apartment by husband's brother in law (who was a Dutch electrician) was horrified by the wiring. He said it was dangerous!

HA! bet you the house is/was abusivo too. Welcome to the club!