Ah...so the season has started

This morning I went to one of our beautiful 5 star hotels on the Via Veneto (which is a posh part of Rome, with upmarket hotels, shops, embassies etc...) to met some guests. I was greeted by a really lovely, bubbly, friendly lady in her late 30s and her husband. We sat in the plush bar area (which happens to have the biggest chandelier that I have ever seen! I love crystal chandeliers) and we began our chat.

L: So what can I help you both with?


Well we are in Rome for 3 days and want to see as much as possible, can you tell us where to go?

L: There are many places to go, and things to see. Have you perhaps read of some places you would like to visit?

L: Ok then... from your hotel you could walk to the Trevi Fountain and then after that you could head to the Panthenon (I say marking these on a map)

L: It is one of the most well preserved and ancient sites in Rome. It was originally a pagan temple which then became a Christian place of worship...

L: It is a nice building to see.

Oh, ok! Great. And where can I go shopping?

L: Well there are many other sites to see, but if you like to shop you could go here (circles onto the map.)

I would like to go to the Colosseum (points for him as he has at least heard of this.)

We all study the map which has a picture of the Colosseum in the cornor and then next to it the Imperial Forum (which is where the bulk of the Ancient Roman ruins are situated.)


L: This is the Colosseum and this is Fori Imperiali with the ruins of Ancient Rome.

What is Ancient Rome?

Here are some pics when bel ragazzo, my old colleague and I played tourist and took the open air bus around Rome. I often enjoy to take this bus, and better still I do not have to pay for it! 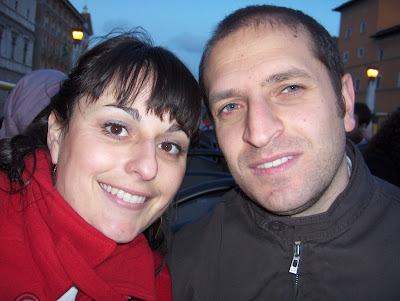 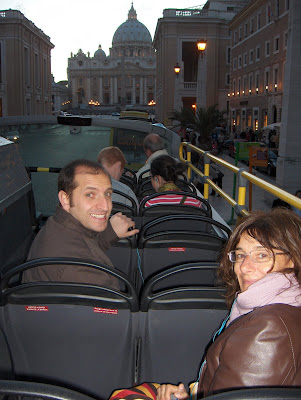 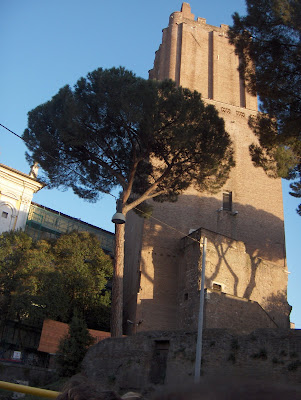 Posted by Leanne was in Italy now in Australia at Saturday, April 05, 2008

What is ancient Rome???? Please tell me they weren't American! Is that asking too much?? ;)

Hi Piccola,
Although I work for a British company she was American and her husband was British. And I am sad to say that she is not the first person to have never heard of 'Ancient Rome.' You would think she had at least seen the Gladiator movie -even if it was just to see Russel Crow!

Wow- you do get some pretty stupid tourists. "What's ancient Rome?" Why are they here???

The tourists at our B&Bs are generally really bright in comparison. Maybe that's because they're staying at our little places (which are definitely budget options) rather than a 5 star hotel on Via Veneto!

You are right Kataroma. Back packers and generally brighter as they save all their hard earned cash to come, and they carefully choose where to go. 5 star people just go as someone probably said their are some nice designer shops in Rome!