Finally, after a long, long time I can happily say I am safe and sound in Melbourne, Australia! I left Sorrento on Friday at 3pm. My flight to Gatwick was not leaving until 8.30pm but I had to take a bus load of guests from our sister company back to the airport. I don't know why we had to leave to early...but we got to the airport in record time and I had to start playing the waiting game.

Finally the flight was called and before I knew it we had touched down in London Gatwick. Once my luggage had come out, I walked outside and waited for the National Express bus to take me to Heathrow airport. I thankfully did not have to wait long, and at about midnight I was at the other airport.

I could not go directly to my terminal as the connecting train was closed, so I headed off to terminal 3 where there were about 30 or so people waiting for the morning flights to start. There was no way I was going to pay for a hotel for 6 hours, so I just sat down with the other travellers (and a few homeless people I am sure) and when the coffee shops opened at 4am I was up and out of there!

At 5am the connecting train started to take me over to Terminal 4...and there was my airline (I flew with a rather new airline called Ethiad) setting up for the day. My flight was not leaving until 9.20am but perhaps they felt pity for me (as I am sure I looked a site after not having slept!) and they let me be the first person to check in at 5.30am.

The time passed quickly enough (I do love the duty free at Heathrow!) The flight was full - not a seat to be spared full - but I had expected as much since we paid next to nothing for the tickets. I flew 8 odd hours to Abu Dhabi then had a two hour stop over, before getting onto a slightly larger, but just as full plane for the last 14/15 hours.

So on Sunday night (Australian time which is 10 hours ahead of Italian time) I landed at the Melbourne Airport, and this little guy was waiting for me: 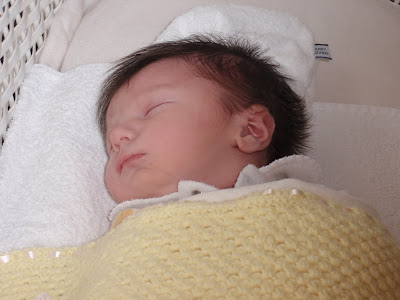 He is just the cutest baby ever!!!!

Bel ragazzo is still in Italy and will not be joining us for another 4 weeks but I cannot wait for him to arrive so we can start our summer holidays together!
Posted by Leanne was in Italy now in Australia at Tuesday, November 03, 2009

It looks like the bonus at the end was worth any inconvenience you endured on your way home from Italy!

awww...He's beautiful! And such long hair too...

Congratulations Zia Leanne!!! Glad you made it home safely. Enjoy!

Ahhh, so cute! Have a lovely time in Australia!

Welcome home, if you still call Australia home that is! I hope you and Bel ragazzo enjoy your stay here this summer.

Hi Gil,
The bonus at the end was well worth it indeed!

Hi Scintilla,
He has SO much hair for a new born!

Hi Kim B,
It may have been a long journey but at least it was a safe one!

Hi Canedolia,
His is just the cutest baby!

Leanne,
Your nephew is just gorgeous. I hope you have a fabulous time in Australia.

Hi Cathy,
He is so gorgeous!