Fuoco and Scirocco- the wrath of mother nature...Fires and African winds 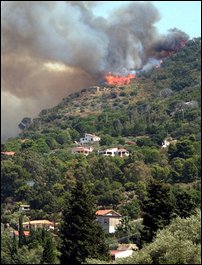 It was going to be my day off today however mother nature had different plans for me.
The island of Sicily has been hit by the dreaded scirocco which have in turn done nothing to help the forest fires across the island.
Let me explain what the scirocco is, as before living in Sicily I had never experienced these winds. The scirocco is the south-easterly to south-westerly wind over the Mediterranean Sea originating from North Africa. The winds come from the desert and vary in strength. Often we get mild dust and sand storms - the sand literally being blown over from Africa.
The worst thing about the scirocco is that you know it's coming. It's the calm before the storm when, the sky become hazy, you can no longer see Mt Etna which is normally looming in the background. An oppressive blanket like heat spreads over the town and people start to go a little crazy. It's true!
I've experienced 2 scirocco periods since arriving. Mostly they last a few days, but last time it was close to a week and was unbearable. It reached 48 degrees at one stage with most of the week was in the mid to high 40s. Part of my job is to greet clients at the Catania airport, and on the 48 degree day I was there. I try to well presented with my uniform on, however who can really look decent when you wake up and it's already 40 degrees?


The poor English guests were horrified when they saw me, sweat dripping off every part of my body, my hair plastered to my face as I tried to smile and call out 'welcome!' Mind you, this was me in the air conditioned airport. We stepped outside into the gale force scirocco winds as I escorted them into our oven like bus.

'Sorry about the heat in the bus,' I said, wiping more sweat and dirt from my brow. 'The bus has been sitting here in 45 degree heat for a few hours, but hopefully it should cool down soon.'
'What do you mean 45 degree heat?' one slightly overweight and terribly white lady asked me.
I attempted a light-hearted laugh, as I had already turned a bit scirocco crazy by then. 'Well it is summer time, in Sicily and at the moment we are experiencing severe weather conditions. It was 43 degrees at 9am this morning, and now it is 45 degrees, and will most probably get a little warmer as the day progresses.' I could not resist saying this last part. And sure enough as these words escaped my lips the customers faces, all pink and sweaty from the heat turned white.

Back to the present day and the scirocco heat which has returned, along with fires raging across Sicily.  Due to the winds, planes cannot collect water to drop on the fire. The roads are blocked and lots of people have been evacuated from their homes. This morning my colleague Luisa drove to Cefalu as we have many customers in a hotel that has been evacuated. She has reported back that they are all fine, but the fires however are still burning. We are hoping that this scirocco will blow back to Africa soon.
Posted by Leanne was in Italy now in Australia at Thursday, August 23, 2007