Stories from the South: The Cosentini

Still no news on where I will be living for half a winter...apparently today I will know, but I am not holding my breath. On to better and brighter things: I am crossing over to the other side, or crossing the sea more like it to visit my bel ragazzo in his Calabrian village, Malito! 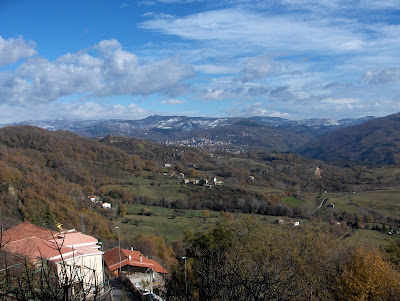 Malito itself is a beautiful, little village and is only 20 minutes away from Cosenza. Here is a story from the south from the last time we visited Cosenza.

Bel ragazzo and I had set off for an evening in Cosenza. We had just enjoyed a glass of wine in a funky, laid back, Cuban inspired cocktail bar when bel ragazzo’s friends called to ask us to come and meet them at another bar. I soon learnt however that we would not be going to the bar itself.
Let me explain, as I found the situation quite bizarre, as over time I have come to find many aspects of life in Cosenza quite bizarre. We had parked the car in the car park where there were (naturally) many other cars. At the end of the car park there was a bar and in front of the bar, therefore in the car park, were 100 people or so just hanging out. In front of the bar. Only a hand full of people were actually in the bar. Granted the bar was nothing special, however the carpark wasn't special either. The amazing thing was that all these people had come to hang out. In the car park. I have travelled much of Italy from north to south, east to west and know Italians like to congregate in the piazza to talk, have a drink, and do what they like. Italians are generally social and like to be surrounded by as many people as possible. However, the difference here is that there was no pretty piazza, no ornate fountain, not even an old statue. There was no piazza. This was just a car park. An ugly car park. And hardly anyone was drinking either. Of course none of Giuseppe’s friends found it strange. They thought I was strange for thinking it strange!

Bless my bel ragazzo, he is a well travelled man, has lived in England, and for a bit Australia, so he can see both points of view. He understood why I found it strange that these Cosentini liked to hang out in a car park. He then told me to look at their clothes. My education on the folk of Cosenza and in deed the folk of southern Italy was to begin! Always conscious of not creating a brutta figura, these Italians all liked to appear more ‘well off’ then they are. Most of the cars you see in the streets of Cosenza are brand new and expensive and most of the people are well dressed. I understand that generally the Italians are a proud bunch and like to stay on the right side of fashion, and in most of the cities and towns (in the north in particular) these looks are justified by decent wages and an abundance of jobs. Down here in the south however, unemployment in high and wages are low. Those that are fortunate enough to find a job often get paid a pittance and are often are never paid on time. Bel ragazzo said on the outside these people appear well off, and sadly and truthfully most of them would rather go without food for the sake of bella figura – a good image.

I have questioned bel ragazzo many times about the state of the south: why is unemployment so high, why are there no jobs, why is the cost of living impossible to afford you a decent life? In short why have the people got no money? Looking around me now at these posh cars and designer clothes I understood. Bel ragazzo said that the majority of the people live in debt. They would rather live in debt to have luxuries they cannot really afford. There was a man, a chef bel ragazzo knew who worked in a restaurant in a near by village. His wage was normal for the parts, not too low, but certainly not high enough to explain the brand new Mercedes convertible he had purchased. There were no dodgy dealings going on, no underhand money, the chef had simply taken out a loan on top of his many loans to buy a new car and now was in serious debt but – what I was soon to learn is a popular southern Italian mentality – debt is the least of their concerns, if it gains them bella figura. The amazing thing about the chef and the Mercedes was that he used to ride his beat up motorino to work as the new car was too expensive to drive!

Posted by Leanne was in Italy now in Australia at Friday, October 05, 2007

Labels: calabria, stories from the south

LOL, that’s funny! I noticed the same exact thing in Soverato (people hanging out outside of the bar). One explanation I received was that nobody wants to enter because they don't want to spend money on buying a drink! Must be a Calabrese thing?!?

Who could go past "la Bella figura". Wow so keeping up with the Jones thing happens over in Italia too.

Hi Carla,
I do think it must be a Calabrese thing!

Hi Cleopantha...I never thought of this but you are right - so keeping up with the Jones!

I know some people in Sydney who do the same. Personally I'd rather be debt free.

Hi Madelyne,
So it is not just a Calabrese thing then - It is international...And moving onto our Aussie shores!