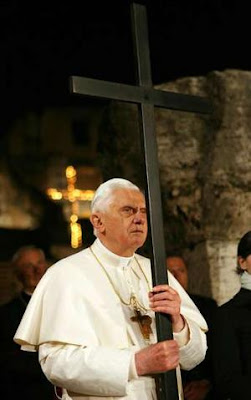 I have not left my apartment today as the centre of Rome has been invaded by thousands of tourists and pilgrims a like who have come to take part of the Holy Easter Celebration. The Good Friday celebration has caused a bit of controversy this week for a number of reasons. First up is that Pope Benedict XVI will preside over the procession (from a vantage point), rather then lead the procession through the 7 stations of the cross on foot. (He will join them as they approach the Colosseum.) There have been no official medical reports about the Pope's health, apparently he is not ill but has a busy week with all the holy ceremonies and needs to preserve his strength! This has caused a lot of faithful followers to be disappointed as for the past 2 years this Pope has actively carried the cross. 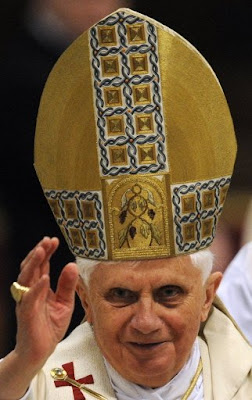 The second cause of concern/compliment is that the Good Friday procession will have a distinctive Chinese feel. We will have to wait until this evening to see if reports are correct, but Cardinal Zen will start off the procession (he is a key figure for the Chinese Catholics) and reports are saying that a Chinese Woman will be the 'lucky' one to pass the cross into the hands of the Pope, as he joins the crowds for the last few stations of the journey. The Pope also went on record this week voicing his opinion about the situation in Tibet '...Violence does not resolve problems, it only aggravates them..." were his holy words.

This is my second Easter in Rome but I don't like massive crowds, I am not very religious and it is too cold to venture outside! 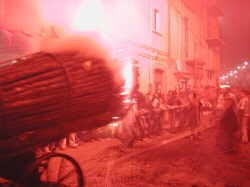 This is a picture of the Good Friday procession in my grandparents village, San Marco in Lamis which is in Puglia. They have a fantastic procession (can you use the word fantastic if it's meant to be holy...?) perhaps unique is a better word...but they have this procession of the Fracchie which is a '...ritual of pagan origin in which bundles of burning wood are hauled through the streets...' You Tube has a lot of great clips and I was lucky enough to be there a few years back for the Easter Week. It is one of a kind, and all the towns people make these huge cone shaped things out of wood and then the burn them as they pull them along the streets. The children carry little ones and men pull along this fracchie which is MASSIVE! Sadly I have no photos of my own as this was back in the days before I had a digital camera! 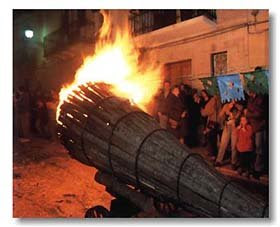 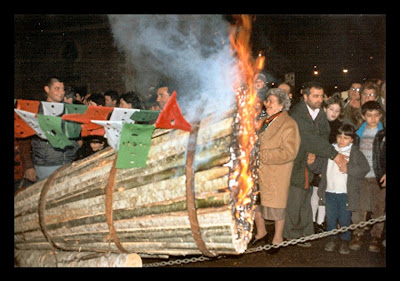 Posted by Leanne was in Italy now in Australia at Friday, March 21, 2008

Hey, my great grand parents were from Puglia too:)
l just love the way the italians get into the festivities.
Buona Pasqua!

Small world isn't it! Happy Easter to you too x