The power of a smile

Last Tuesday morning at the crack of dawn my colleague and I set off for the Fiumicino airport. We were going to fly into Verona and then be taken up to Lake Garda for 3 days of training. We left home at 7am (I am not a morning person) and made it to the airport in plenty of time. We decided to go straight though security and relax on the other side.

I had passed through the metal detector when the security man asked if he could look in my suitcase as there was a knife inside. A knife! I said, There must be some mistake. I have no knife. You must mean my tweezers.

We walked to the side table and I began to open my bag. The man said they were not tweezers but there was definitely a knife. Ahhh...my eyelash curler - it looks a bit like a pair of scissors. Whilst I was looking through the bag the man asked me where I was from. I said I was an Australian Italian and he said he would love to go to Australia one day and what on earth was I doing in Italy. Whilst chatting we discovered that low and behold - I had a knife in my bag! In with my mascara and lip balm I had my swiss army knife!

I was shocked and embarrassed and told the man that I had forgot it was there. I had bought the swiss army knife in Switzerland years ago when we were backpacking around Europe, and my twin and I had our names engraved on them. It was an obvious weapon with a variety of knives but I gave him my biggest smile and asked if he had to take it. He looked around, asked where I was going, and said to just hide it in the bottom of my bag! With that I walked off and pretty much onto the plane with my knife in tow.

When we got to Lake Garda I gave it to someone to post to me, as thought once is luck but two times is tempting fate!

Here are some pictures from Lake Garda. The weather was terrible, so humid and foggy that you could not even see that much of the lake. Last year it was hot and we were able to take nice long walks, and go out for drinks in the evening, this year it rained non stop for 3 nights, so we did not make it out of the hotel. Not that I minded as to be honest Lake Garda is not my cup of tea. It is not so 'Italian' if you have been there then perhaps you know what I mean. It is very flat, peaceful and clean...there is none of that craziness that I love about the south of Italy! It is a town for old people and Germans (in my opinion)and the further north you go, the more it seems you are in Germany, Austria or Switzerland with the houses and atmosphere. I have been to Lake Maggiore a long time ago and had the same feeling there. No offence if anyone lives there as this is just MY opinion! 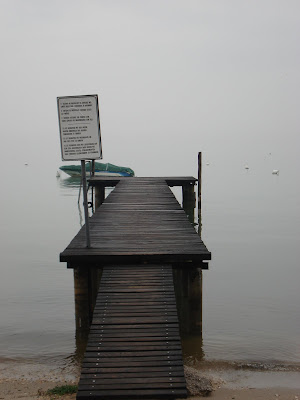 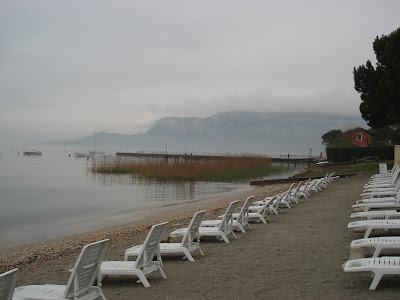 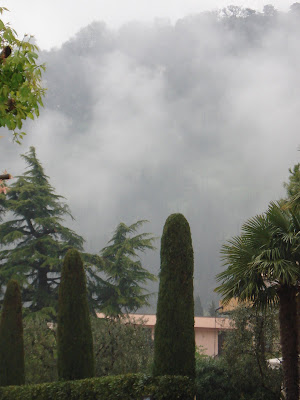 Posted by Leanne was in Italy now in Australia at Monday, April 14, 2008