London has the 'Speakers' Corner' the main one being held in Hyde Park, which as the name suggests is a bunch of random people, who get up on chairs, ladders or just remain on ground level and speak about anything and everything that is on their mind. The police keep a watchful eye to make sure nothing gets out of hand, to be sure the speech is not unlawful, and to make sure the crowds are not out of control (but hey..this is England where the vast majority are polite and well behaved :)The first time I went through Hyde Park and saw speakers' corner I thought it was great that we live in countries where freedom of speech really does exist: there were black activists chanting and singing, a lone woman standing on a chair and reciting poetry, there were some young people talking about politics and lots of other groups just doing their thing...

Here in Rome there is a Silent Speakers' Corner, or perhaps I should say statue. Not many tourists read about it, or know where it is even though it is located close to one of the most tourist areas, Piazza Navona. The statue is called Pasquino and is (funnily enough) located in Piazza Pasquino and as you can see from the pictures, he is an ancient statue where people stick there comments, poems, declarations or love and hate. The statue is an ancient Roman relic and has been in the current location since 1501, placed there by Cardinal Oliviero Caraffa. Apparently there are many theories as to how the statue got the name Pasquino; this theory is quite cute as some say 'Pasquino' was a local schoolmaster whose pupils used the ancient statue as a stepping stone to cross the muddy street to get to their classroom. Others say he was a tailor in the know with all the latest Vatican gossip...who knows why he is called Pasquino? We do know that the tradition of posting comments on the statue came from Cardinal Oliviero Caraffa who used to dress 'Pasquino' in mythological garments every year on April 25th (Feast Day of Saint Mark) and attach Latin versus to the adorned statue. Gradually over the centuries the versus become more common and were no longer restricted to April 25th - and here you have it, centuries later and people are still carrying on the tradition (so to speak.) 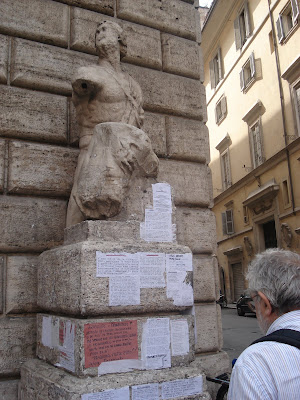 I don't really know what this person was writing about as I think it's Roman dialect...I think it says something about the fact that you can not be certain about things in Rome. Enough thinking! and something about the song by 'Giovinezza' and Rome being a thief (I said I couldn't understand it! I barely speak Italian let alone Roman dialect and bel ragazzo is not here, and my Austrian housemate (soon to be ex-housemate) does not speak dialect either)


EDIT: Lucio my opposite blogger (by going from Italy to Australia) has kindly translated the message from Roman to Italian to English...so please check my comments section for the translation as I was a little off to say the least:) 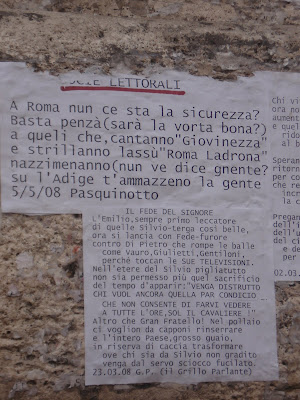 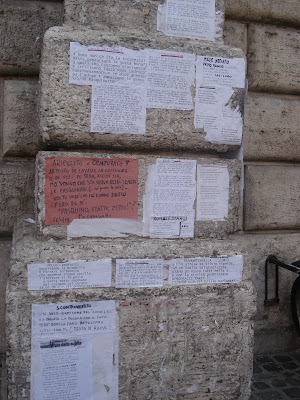 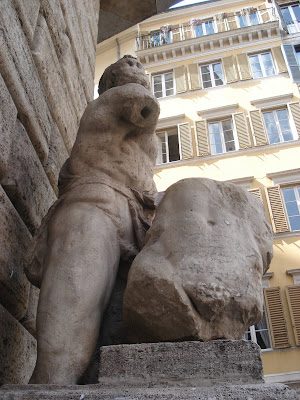 Posted by Leanne was in Italy now in Australia at Monday, May 12, 2008

I offer my knowledge to translate the versus written in Roman dialect (even though I'm not from Rome, I can do it... :-)):
In proper Italian it would be:

It clearly refers to the recent fight in Verona (sadly, my town) that caused the death of a young man.

The writer seems to be ironic regarding the alleged lack of safety in Rome, whilst up North people chanting fascist songs (Giovinezza) and referring to the Capital as a big thief (citing the party Lega Nord) beat to death an innocent person.

Also, nazzimenando is an invented word meaning something like "to beat in the name of nazism" and I think that the text in brackets (non vi dice niente?) might relate to the recently elected mayor of Rome, Alemanno, also a former supporter of the far-right parties.

Thanks so much for the translation Lucio :) I really had very little idea of what it meant, and now I understand. Sad to hear what happened in your city, but these things happen all over the world sadly (even in your 'new home' Sydney.)