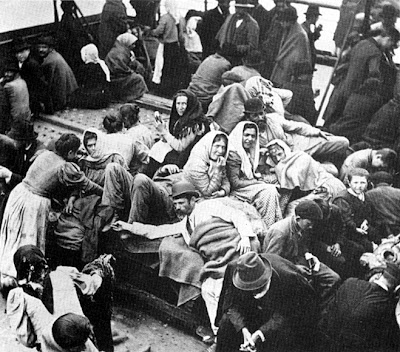 It took my dad 52 years to return to his home land; his place of birth, the place he grew up, went to school and spent his entire child hood.

I really cannot imagine being gone from Melbourne for 52 years. I will have been gone 2 years at the end of the year and bel ragazzo and I are planning to go back for a (hot) Christmas.

I often asked dad why he never went back. His answer was that he had no time. Perhaps as the years pass the urge to return gets less and less until your 'old' home is all but a distant memory. Chi lo sa? All I know is that it took him 52 years to return, and if it hadn't been for my mum forcing him to come and visit me this year then I am sure he would have put off the trip 'home' for quite some time.

My dad's eldest brother, the one who was 28 years old when he migrated has never been back, and has told everyone that he never will. Since moving to Italy I have held these romantic notions that my dad (and all my Italian relatives) spend their time thinking fond thoughts of the bel paese they left behind. I love living in Italy so much that I like to think that they all miss Italy too. I have to remember however that the Italy they left behind is not the Italy in which I now live. My dad was happy in Italy but as soon as that boat set sail for the other side of the world he never, not even for a moment looked back.

He never once missed Policastrello and the village life. Don't forget he was only 14 years old and he went from a town of 1000 people to a giant city full of millions. He was put straight into school and within months had learnt the language and fitted right in. Gone were the days when Italians were called 'daygo's' there were so many Italians in Melbourne that dad felt right at home. The city had so much to offer, there was so much to do, places to go, friends to be made...from day one he was happy in his new home and never once thought of his 'old' life.

This was not the case with all of Italian immigrants. A lot of them could not cope in Australia - sure there were plenty of jobs, but the older people in particular missed the village life, missed their friends, missed how social Italy was. Australia to them was a cold land where no one gathered in the piazza's to gossip the night away. They did there work then either went to the pub or home.

Not my family though, once they came they all decided to stay. My dad and his brothers and sisters have never felt regret or sadness over leaving Italy behind. In fact they are happy. They all settled into Australia and were successful in life, found wives and husbands, had families of their own, opened businesses, bought houses, established a new, profitable life in this new land of opportunities.

All but two of dads siblings have yet to return to Policastrello. I know that dad is happy he came back, happy that the village is just like he remembers, happy that he wants to return and explore as much of Calabria and Italy as he can. I know however that when he looks at Policastrello he does not think 'home' as Australia is his home, it is his past, present and his future and the Italy that he left behind 52 years ago is all but a distant memory.

Posted by Leanne was in Italy now in Australia at Tuesday, June 03, 2008

Fantastic post! My southern Italian parent emigrated to the US in the 60s and never once considered coming back to the homeland. They were both from small, rural towns where most of the houses had no indoor plumbing or electricity in the 60s, so their memories are of another Italy.
I remember going to visit my mother's side of the family in the 80s and being blown away by how strange it was: toilet paper was a commodity and it had the texture of birthday streamers, water would get shut off for 4-5 hours during the day so we would fill up jugs to use during those hours, even milk was "different".
My parents have come back to visit Italy but only to see family, not because they "enjoy" being back in Italy. In fact my mother has a hard time understanding why I'd live in "such a backwards place". She's so used to American convenience that the thought of being in a place like Italy is inconceivable. They love America immensely and are grateful for the opportunities it gave them- two penniless Italians who spoke no English... It's funny that after 10+ years in Italy I don't feel that same passion or attachment to this land that they feel toward America..

Hi Romamerican,
I am glad you can understand as it does sound like your parents experienced the same as my dad. And look at us both now, the children of immigrants living back in the country they left behind!

This is completely different as I wasn't fleeing poverty but I moved from New York City where I'd grown up with my Australian mum and Swedish dad for Sydney when I was 14 years old. It's a funny age to "migrate" as you're kind of grown up kind of not. Anyway I held onto part of my American accent so I'll always be the "American girl" in Australia (and the Australian girl in the US) but I become very Australian. I guess high school, uni etc really form you and also having an Aussie mum and huge, very close Australian family formed me also.

Anyway I had a real longing to return to New York which I did at age 29 and lived there for 3 years. I love,love, love New York!!! However, I also know that in some ways it's not a very livable place. The whole of Manhattan where I grew up is full of rich people now - normal people have all been pushed out by high rents. It still has that amazing energy but now I have more of a feeling of 'been there done that.' I had to get it out of my system though.

Hi Kataroma,
You were 14 too when you 'immigarated' to OZ. It must have been strange and hard for you while at the same time being exciting and fun. I wonder which country you call 'home'?