Bel Ragazzo and I are back in Rome with the brother and fidanzata in tow. We are back to lots of work (well I am since my lazy colleague decided to do nothing while I was gone...) We are back to the heat and we are back to the fact that we don't want to be here anymore. And to make it even worse we had such a lovely and relaxing time down south in Calabria we didn't want to come back!

On the 15th we celebrated Ferragosoto in true Malitano style as the folks of Malito head even further up the mountains to escape from the heat. Malito is already a little village perched freshly at 700 odd metres above sea level, but when the thermostat is reading 35 degrees it is hot even this high above sea level. So we all piled into the cars and drove another 200 metres up to have a picnic in the countryside.

It was coolish up there with a gentle breeze making sure we didn't faint, and the boys made sure there was enough cool water, beer and vino on hand to quench our thirst. 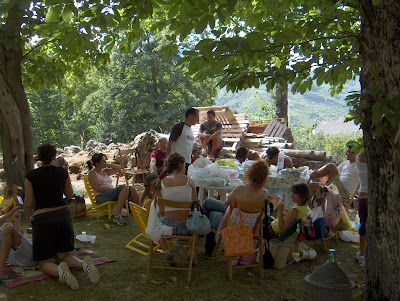 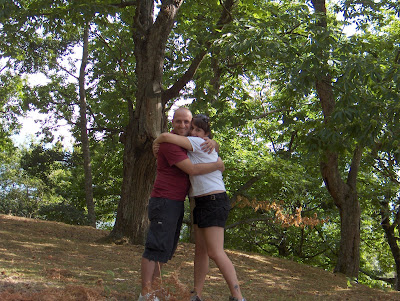 On the 16th bel ragazzo and I hit the road to head south east and venture into the territory of two fellow bloggers... Bel ragazzo thought I was mad when I said I wanted to venture to the Catanzaro lido to meet Cherrye of My Bella Vita and Michelle of Bleeding Espresso the day after Ferragosto. We anticipated traffic jams galore, but I was smugly pleased when there was next to no one on the roads, or at the beach and we got to the girls within an hour.

As Michelle mentioned on her blog we have no photos but that does not mean it was not a delight to meet them! We went to the beach (well Michelle opted to sit in the shade) and then we went for a rather comical lunch.

Let's just say, why bother to give us menus, let us ponder the menus for a good 15 minutes and then come to take our orders to tell us then that there is nothing available from the menu... We were all looking forward to a piazza when the waiter told us the piazza oven was closed. Ok. No problem (well I did think he was joking at first, but then realised he was serious.) At this stage the waiter did not bother to inform us that the kitchen too was closed. So off he went to leave us be with the menus while we ummd and ahhed. He even came over once to ask if we were ready and we asked for more time to decide!

Eventually another waiter came to take the order and I think it was bel ragazzo who ordered first - obviously off the menu. He rattled off his requested dish when the waiter interrupted and said that the kitchen was closed and that we could have a plate of pasta with eggplant and that was it. This dish was not even on the stupid menu! I asked the waiter why no one had bothered to tell us the kitchen was closed before, but he answered with a shrug of the shoulders and 'Boh.'

Eventually we all decided on the only dish that was available, we assured the waiter that Cherrye's eyes were natural (they are a lovely, bright blue) we told him that we were not tourists but that we lived in Italy and I agreed with him that when it is summer in Italy it is in fact winter in Australia.

And that was that. An funny lunch meeting two lovely ladies in Calabria, and what proved to be a great weekend down south.
Posted by Leanne was in Italy now in Australia at Tuesday, August 19, 2008

Labels: calabria, Malito, me, stories from the south, travel

You know I'm glad there were others there to document our interesting adventure...sometimes I think people think we exaggerate about life in Calabria ;)

Can't wait till you come back this way!

Your so lucky (to meet up with fellow bloggers), I'm so jealous. Pasta with eggplant, I'll eat that anytime especially prepared in Italy!

Hi Michelle,
Be expecting the book too soon. I left it for bel ragazzo's dad to post since I forgot it that day!

Hi Lucia,
You would have loved this restaurant then since that is all that was on offer to eat. :)

Lovely to find you out here. The picnic looked fabulous and made me envious ...

I'm a kiwi who accidentally moved to Belgium for this guy I met while I was living in Istanbul on my way to Italy ...

I can't wait for your next trip... did you say October?

Hi Di,
Looks like you have an intersting story, I'll have to make a vist over to your site!

Hi Cherrye,
Hope to be there for 2 weeks in October so we can meet up again, and maybe for a piazza this time!