Chestnut collecting in the Calabrian countryside. 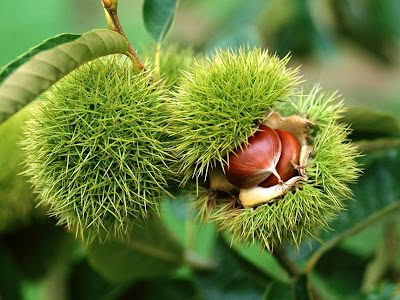 I spoke to bel ragazzo this morning. He said the sun was shining, the air was crisp and clean, the sky was a brilliant blue and he was just about to leave for a day of chestnut picking with the family. Yes - obviously he is still in Malito, still traipsing around the Calabrian mountainside having a jolly old time.

I told you here that the family has many old houses in the Malito old town centre and in the countryside (one of them which we want to restore.) I have also said in the past that when ever I am in Malito I am always told of new 'plots of land' the family seem to own. (In small villages, people often live in the town centre, and then have numerous plots of land, old houses, or storage sheds in the countryside where they generally grow vegetables, maybe have some animals, store the year supply of wine, oil, bottled tomatoes etc... - when I say countryside I do not mean far away in the country...I just mean outside of the town centre, down the road really, which they call the campagna.)

I asked bel ragazzo where they were going chestnut collecting and he said they were going to their plot of land which is full of chestnut tress... Ahhh..what plot of land with chestnut trees? I had never heard of this chesnutted plot of land. Oh, that's because I have never been there. There is no real road to get there. This particular plot of land is above Malito and is in the middle of other peoples land, so you have to leave the car at a certain point, open the locked gate and then walk to your section. Ok. Got it.

Bel ragazzo says he'll take me there when I get to Malito in mid-November...I was so excited as I have never been chestnut collecting before (I know you just pick them up off the ground, but for someone who has never done it, I imagine it would be fun!) Bel ragazzo however kindly pointed out it will be to late for chestnut picking when I get there. Oh. Ok...but surely there will be other wild things to collect? I missed the chestnut collecting, I missed the mushroom hunting, I missed the preparation of the years supply of bottled tomato...I have to do some research into what one does in November and December...When is it asparagus season? Wild chicory perhaps?
Posted by Leanne was in Italy now in Australia at Sunday, October 26, 2008

I love reading your posts about Malito because it reminds me of its neighbour...my Carpanzano! :)

My family also has various plots of land and houses (which are used to house the meats, make and store the tomato sauce and wine). I didn't know that my father owned a plot of land (with his brothers) until I was in Italy this summer. I guess it gets inherited over the years as it gets split up between grandchildren, neices, nephews, etc.

I'm sure the bel ragazzo is having a grand old time in Malito!! :) Just think...in a few short weeks you will be there too!!

Hi Lulu,
It's funny that there are so many plots of land out there...I bet the next time you go back to your Carpanzano you will be introduced to some more of the families land!

My grandmother had a plot of chestnut trees too. Used to make flour from them during the war. For the asparagus, you'll have to wait for Spring.

How fun it must be to do all those things. Sounds like Bel Ragazzo's family are the Trumps of Malito! ;) I remember when Ale's family was making the tomato sauce to store last month. He said he hated doing it, but all I could think was, "How fun!!"
It'll be nice to read your posts about all your picking/bottling adventures.

Hi Scintilla
I have to wait till Sping for Asparagus! I've got to get more up to date with seasonal fruit and veggies.

Hi Piccola,
I too think bottling sauce would be fun, but then I guess for those like your Ale who have been doing it for years the novelty quickly wears off! I am also not sure I will have any posts about bottling, but picking I hope. There must be at least one mushroom left on the mountains in November!

You are living my dream! The things i would do to live in Italy. *sigh*

I must say that mushroom hunting sounds like brilliant fun. Any work that results in yummy cooking goodness is always a good plan. :)

So when are you baking the chestnut cake with chocolate glaze, that my Mother made when I lived in France?
New to your blog. Very interesting.

Leanne, it sounds like wonderful fun. I'll join you in being jealous of him having such a marvelous time!

Have you won the lotto yet? best of luck! I hope you win!

The World According To Me said...

Thanks for the message on my blog, I've replied with a link to places to stay in Dorset.

I'm loving your blog and look forward to reading more...

Hi Cairo,
I may be living your fream at the moment, but you seem to travel the world and live in fantastic places, like Egypt at the moment...so who knows. One day you and the hubby may make it to Italy!


Hi Gutsywriter,
Thanks for stopping by the blog, and for commenting! Mmmm...I have to find myself a recipe for chestnut cake with chocolate glaze - sounds YUM!

Hi Rosie,
Sadly I did not win the lotto...I did not win anything. Well...the other day I won a book which is something at least!


Hi World according to me,
I did not actually leave a message on your blog...but hello anyway!

Wow that picture is incredible! Is that how chestnuts grow? Really? Inside those prickly things? I didn't know that! And I'm TOTALLY loving Roast chestnuts at the moment.. MmmmMmmmm

Hi Pomegranate,
Yes, chestnuts grow in this 'case' like shell and then you wait for them to fall from the trees and then you go and collect them! (Not that I have personally ever collected them.)

Loved your chestnut post! When I was in Grimaldi last month we went to the family chestnut plot. I would advise picking the chestnuts up very carefully. It took three days to get the prickly spine out of my finger! :)

Hi Deb,
Oh! You were just in Grimaldi. I am sure you had a great time, apart from the prickly spines!