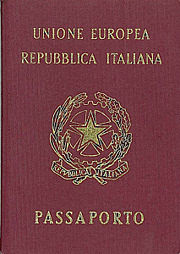 Lulu over at Calabrisella Mia is well on the way to getting her dual citizenship, and hopefully one day soon will be moving to Italy, and maybe even living in a little village on the other side of Malito.

She got me thinking about how lucky I was to have my dual citizenship sorted before I had even decided to live in Italy. It was very easy thanks to laziness or lack of money...I am not sure which. You see my dad has a large family and 52 years ago they all said goodbye to their small Calabrian village, Policastrello, and migrated to Australia.

I am not sure of the particulars, but for some reason only half of the children were naturalized as Australian Citizens while the other half remained Italian (I think it was the eldest children who obtained Australian Citizenship.) What ever the reason it worked in my favour that dad remained an Italian Citizen till only a few years ago.

Now a days my dad is an Australian Citizen and the story is actually quite funny. It took him 52 years to return to Italy, and it took him about 50 years to even leave Australia! A few years ago my parents decided to holiday in Vietnam...the only problem it seemed was that dad did not have a passport, not Italian, not Australian...nothing. I don't know on what grounds he had been living in Australia, don't get me wrong - he was a legal resident who used to own a business and was a tax payer his whole life, but I am not sure of the particulars, of what documentation he was given when he migrated.

So the day comes when mum and dad want to go on a holiday and dad has to get naturalized so he can get an Australian passport to leave the country! It was so funny when they told me. After 50 odd years living in Australia finally he swears alliance to his not so new home so he can go on a holiday! 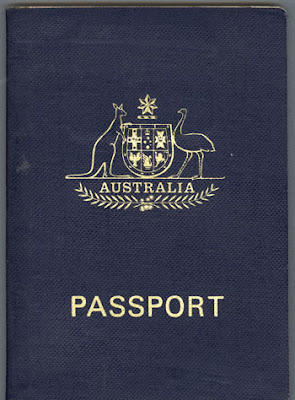 EDIT: My twin has since commented below that Dad did not become an Australian Citizen as he could not make it to the office since he had to work!
Posted by Leanne was in Italy now in Australia at Thursday, October 30, 2008

It seems the laws were less strict then. Your Dad seems like a hard worker who likes to stay put. What made him want to visit Vietnam , your Mum?

Hi Scintilla,
It is funny!

Hi Lala,
I have no idea why they chose Vietnam...maybe they found a good deal...no idea.

I have a friend whose Dad is from Naples and left for Canada in his twenties to better his life. No kidding, the Italian gov't took away is citizenship and he CANNOT get it back! However, his daughter who was born in Canada and CAN get Italian citizenship.

Dad told me that he never became Australian because he could not get to the office! According to Dad when some of this brothers and sisters started becoming Australian, Dad could not leave work and apparently the office you needed to go to was in the city and only open for a couple of hours during the week... thus Dad's reason.
Love Melanie

Wow! I've never seen an Italian passport before! I have dual citizenship also - I have British and Australian. I was reading about your awful photo when you were trying to hide from your furbi guests... my old passport photo was like that! I looked like a drug criminal! very happy to have a nice new photo that looks like a responsible citizen!

I'm so jealous of your gorgeous old house! I can't wait to see it when it's been renovated and it's ready to live in!

That is a funny story. Unfortunately my dad did get naturalized when he came to the states so for me to obtain Italian citizenship is a big hassle, but recently I decided to continue on the quest to obtaining it.
About what Melanie wrote, I guess not much has changed if even back then the consulates office wasn't very convenient/customer friendly because also nowadays it's only open a few hours (per day)! :-)

Hi Ms Violetta,
That is like me. I have dual citizenship, but my dad and my grandparents had to give up their Italian to become Australia so I have no problems to live here, but if they want to come back they have to get a visa or something for one year before they can start the application process. Crazy if you ask me!

Hello Melanie,
(For those reading this Melanie is my twin.) So that is the reason! Well whatever I am glad as we got our passports easy!
Love twin.

Hi Rosie,
You are lucky to have dual citizenship as you too can live in any country in Europe, or Australia!
Also it'll be a long, long time till our house is ready to live in. We have no money so will be working on the land this time rather then the house itself. One day however...one day.


Hi Carla,
Shame that your dad was naturalized before you were born. But best of luck with getting the passport, you should be able to get via grandparents perhaps. Not sure on the particulars but I hope it works out for you!