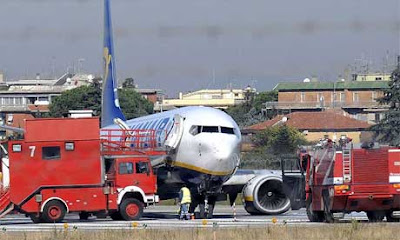 I am so glad that I am not working here in Rome today!

Since yesterday the Ciampino airport has been closed since a Ryan Air flight from Frakfurt had to make an emergency landing at Ciampino due to bird interferance. As the plane was making its decent, a number of birds hit the plane and got sucked into the engine causing substantial damage. The customers had to evacuate the plane by emergency chutes and seven people were sent to hospital with minor injuries. The plane is now sitting at Ciampino with one part of the engine on the ground. Some flights were to gain entry into the airport, but then the ground staff decided to throw a last minute sciopero (strike) without any warning so now the airport is closed...

Oh and that's not all. Don't forget that Rome has two airport, we also have the main international airport Fiumicino aka Leonardo da Vinci. Since yesterday Alitalia decided at the last minute and again without warning to go on strike, cancelling about 20 flights and leaving thousands stranded. My colleague who has taken over from me has just come back from the airport as she has customers who have been waiting since yesterday to fly home. No one even offered them a bottle of water and no one has been communicating with customers as to when or how they will be re protected on other flights. The issue with Alitalia is basically that they have been taken over by CAI and staff are not happy with the new work contracts.

So yes - as you can see I am very happy that I am not working today in Rome! I think I may see what's on at the cinema...I am a lady of leisure after all. 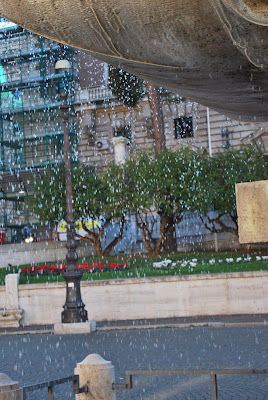 Posted by Leanne was in Italy now in Australia at Tuesday, November 11, 2008

The flight to Ciampino from Frankfurt Hahn is one that my friends take often from Luxembourg. I'm glad that no one was seriously hurt.
You must be wallowing in your luck that you missed out on all this!

Hi Lulu,
I did get out just in time!

Hi Scintilla,
Luckily no one was hurt. I hear they are going to get some predetor birds, like an eagle or something to fly around the airport and get rid of these naughty birds causing damage to planes.

Yay, i hope you are enjoying being a lady of leisure!!
That is bad about the people being hurt :(

Hi Monika,
I like being a lady of leisure a lot!
And those people were not seriously hurt which is a good thing, just minor injuries I think.

That is awful! What an absolute mess... Looks like you became a lady of leisure (I love it when u say that! ;) ) in the nick of time! But I can't help but feel sorry for those poor birds... they got sucked up into the plane?? I imagine they died a horrible death... poor things I don't wanna think about it!!

Hi Carmen,
It is a horrid thought thinking about the birds. I too don't want to imagine it!