Differences between north and south. 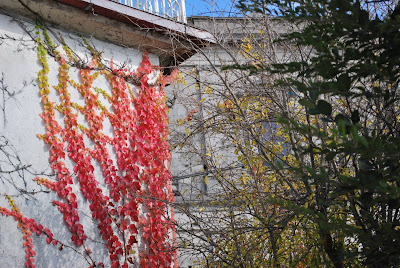 It has been a while since I have posted (slow internet and all that) but all is well here in Malito, Calabria - well minus the fact that yesterday was the first day of sunshine that we have seen in quite some time. Italy has been caught in a stint of very bad weather. I have seen on the news that Venice is literally underwater...and here we have had non-stop rain everyday, strong winds, the power going on and off...and being stuck inside (at least by the open fire place) since a torrential down pour is not the best weather for playing tourist.

Bel ragazzo and I felt a little like caged animals so we braved the heavy fog and freezing winds to go out to dinner in a local pizza restaurant on Saturday night. The power kept flicking on and off throughout the meal, and the restaurant was near empty as not many people were crazy enough to venture out with the elements as they were, but it was like a foreigners dream come true as a local Calabrian folk band was enetertaining us that night. (We had no idea...just a nice bit of luck!)

For those who have never been to the non-touristy Italy, you would get a shock at just how different the prices are. We went out for a pizza on Sunday night as well and there were 4 of us. We had 4 pizzas (I am a lady of expensive taste and like to eat pizza with porcini mushrooms - bianco or white thankyou very much as on Saturday night I forgot to request this and the pizza came out with a tomato base which steals all the flavour of the porcini...This pizza by the way is always the most expensive on the menu.) So we had 4 pizzas, 2 large bottles of beer and a quater of house red wine (yes, for me. I hate beer.) The bill came to €24....and bel ragazzo and I just looked at each other and laughed. You'd pay at least €40 for such a meal in Rome...at least!

My pizza was 5€ and in Rome and other such places for a pizza or pasta with porcini you will be paying anything from €8-€12 euro. The Heiniken was something like €1,50 per bottle whereas in Rome you pay about €5 for a pint of beer. My wine was also only €1,50 (and it was an overflowing caraff verging on half a litre rather then one quater.) After the meal in all the places I have ever eaten in Calabria, once the bill has been paid - they offer you (a.k.a free of charge) a liquer to help digest the meal. I like a little limoncello to help my pizza go down...while bel ragazzo will usually have an Amaro or a Grappa (both a little potent for me.)

In Rome once I was offered an after dinner liquer once I had paid for my bill. Assuming it was free I drank my limoncello and left the restaurant only to be chased down the street by the waiter calling us back to come and pay! True story!
Posted by Leanne was in Italy now in Australia at Tuesday, December 02, 2008

I love porcini too! Mmmm... we are getting pizza tonight! Yay... I'm so looking forward to ur differences of North vs South. Please confirm Leanne ~ is it true that in Calabria the women walk in front of the men so the men can keep an "eye" on them... cos they are so traditional? Thats what my friend told me who spent the summer there... LOVE TO GO myself!

Sounds like a great pizza- minus the tomatoes:)!
There's a great pizzeria in "Aria di Lupi" but it's quite a curvy mountainous drive and might not be the best considering the nasty weather you've been having..!If it clears and you get a chance to check it out, it's well worth the drive- they make one of the biggest pizzas there and you can watch them do it all behind the counter. We always try and make a trip there, especially when folks from out of town are visiting!
And how do you like the weather storms in the village? Pretty impressive and certainly like nothing I had ever experienced before- makes the fire quite an important companion!
I'm curious about your internet connection...How are you able to connect? Last time we were there, it seemed that dial-up through the phoneline was the only means of connecting and I am really hoping to find a better way next time we go!

I really LOVE reading your blog! It reminds me of the times that I was in Calabria visiting family. I brought my husband there for the first time last year and we were also amazed at how inexpensive it is to eat in Calabria. We loved every bit of it!

That sucks that the weather isn't cooperating. My parents are currently visiting Calabria and I don't think that they are enjoying themselves. Hopefully it will be nice (and perhaps with snow) for xmas. :-)

Hi Carmen,
How funny is your question! The answer is NO, No and no.... women DO NOT walk behind the men! Ha! Maybe back in the day they did but I can guarentee that these days we all walk together.

Hi L'Americana,
Bel ragazzo has heard of this restaurant and has eaten there many times but he says they have not been for a while. They think the piazza chef may have changed...we will see. And bel ragazzo and his brother remember you and your husband. The said that you do often come back to Malito for the summer!

Hi Rosabela,
The weather is really very bad at the moment. Your poor parents - it is not the best weather to go out and about site seeing. I hope for there sake (and mine) that it gets better!

I think we shall have to make our next visit to Italy....Calabria!!

Do you just have a pizza with porcini on top..never heard of that. The price is amazing, you can go out a few more times at that price :-)

Oh I love Limoncello, we have just spend 10 days in Liguria, and were offered it free of charge as well :-)

Leanne I stumbled on your website after doing a google search on Malito and I was thrilled to read your blog. More importantly my parents were born and raised in Malito and were so happy to see the church they were married in your photos. They recognized nearly everything in the photos. We still have family in Malito. Our family goes back many generations in Malito. Keep writing and take lots of photos.Ciao.

I love the piazza which has a cheese base and then just porcini on top. I get them to leave off the tomatoe paste as it takes the flavour from the porcini in my opinion.

Hi Rose,
So your parents are from Malito. I am sure bel ragazzo and his family would know them. If you want to let me know your family name I can ask them. I will make sure to take some photos when I am back and post them on the blog for you!

Hi Leanne. So glad you wrote. My dad's sister is named Lorenza Bombini and her husband is Guido. They have 3 daughters that I am not sure live in Malito anymore. One of their daughters my cousin Rosa is married to Senatore Antonio Gentile. My mom's cousins are Ettore and Enrico Salvati. Also my dad's brother is Francesco Mancini. He summers in Malito but lives in Grimaldi. I guess being a small town I am sure your bel ragazzo knows them. Ciao!

Hi Rose,
Thanks for the names. I'll ask bel ragazzo as I am sure he knows them (or of them) and I'll let you know!

Hi Rose,
My bel ragazzo knows you family! He knows Lorenza and Guido Bombini, and Senatore Antonio Gentile (who is bel ragazzo's cousins good friend. Bel ragazzo's cousin is a doctor called Franco) He also knows Ettore and Enrico Salvati but not so well. The three children don't live in Malito anymore but they come back every now and then. My bel ragazzo is a friend with one of these children...the one who comes back to Malito most summers. He also thinks that the thirs child is married to the brother of Antonio Gentile?