Time to fly away

The past two months here in Australia have flown by. It feels strange being back in Melbourne...strange in that good way. You know how it is when you are away from a place for a long time, but then as soon as you arrive it feels as though you never left...as though nothing has changed. It is the same when you see friends and family you haven't spoken with for years and you just pick up where you left off...

I haven't even been doing that much here. My mum kept wanting to take me to the city, or to the country or some other tourist places and I had to remind her that I left the Italian tourist (bel ragazzo) behind, and that I had actually lived my first 23 years in Australia and the last thing I wanted to do was go to the city, or the country. I used to work in the city! I told mum the things I most wanted to do were 1) go and see English films at the cinema, 2) eat lots of international food 3) watch lots of English t.v 4) read lots of English books 5) speak lots of English...ha! 6) go to the beach 7) get a tan 8) do nothing. So I have done all of the above and am happy.

I am not sure when I am next going to be back 'down under' and this time it has been more necessary for me to reinforce the fact that bel ragazzo and I may never return to live here. There comes a time in a travellers life where you stop being a traveller and start becoming an expat. Since leaving Australia 7 odd years ago I never officially told anyone that I was intending to settle overseas. I just assumed that if I was still over the other side of the world then they might get the hint. It used to annoy me so much when my family would ask me when I was coming home to Australia, when was I going to settle down... Did I really have to spell it out for them? Seems I did. My twin sister and my colleague both said that I had to tell my family outright that I may never return to live in Australia. It was only fair.

So I did tell them. 2 years ago when I was living in Sicily I called and said that I did not see myself coming back to Australia. They accepted this for a while, then forgot...so last year kept asking me again when I was moving back. So again last year I told them all that I was happy living in Italy with my bel ragazzo. Since coming back and seeing them face to face, it seems that once again I have had to tell some family members that I may not be ever coming back to live full time in Australia. I only realised I had to tell them more forcefully when my mum questioned my motives for wanting to ship a lamp overseas!

I have had a great time being back but at the same time cannot wait to leave and see my bel ragazzo again. I will be flying out of here on Wednesday, get to Rome on Thursday where I stay the night before flying to the Canary Islands on Friday. My posts may be a little infrequent but there'll be tales from the Islands coming soon. 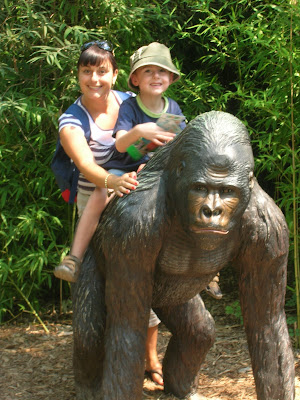 My nephew and I at the zoo.
Posted by Leanne was in Italy now in Australia at Sunday, March 01, 2009

Can't wait for the pics from the Canary Islands! Your life sounds just incredible, here for a bit there for a bit and heart always in Italy... seems perfect to me :) It's normal that your family keeps "forgetting" about your intentions to stay in Italy, it's not something the people who want to have you around want to rememeber. I suppose this kind of illusions that parents have about their children are neccessary to make things work :)

I've been overseas for twenty two years and I still get asked if I'll move back to Australia.
Have a great trip back 'home' and look out for cockroaches at Fuerte!

Haha I don't think being asked if you'll return to your home country ever goes away. I've been in Rome for almost 4 years and am asked that at least once a week! Even by other ex-pats!

Jessica said...
This comment has been removed by the author.
1/3/09

aaah, it is difficult living in 2 cultures sometimes, isn't it? especially hard for you being so far. i understand where you're coming from but it must be sad for your family, too. good luck and safe journey home!

One way to look at it is that you will always have two "homes" that you can go to if needed.

An oft quoted saying is "Happiness is the journey, not the destination".

Good luck and thanks for your posts

Hi BC,
My life may sound incredible but it is not so stable! I do love travelling around and living in different places, but sadly the time is fast approaching when bel ragazzo and I have to settle on one place and try to make a proper go of it there. At least for this year I am going to try and live it up!

Hi Scintilla @ Bell'Avventura
HA! So you are STILL asked when you are coming home. Guess I just have to get used to it.

Hi Jessica,
And you are another one always asked when you are coming home. Really does never stop, look at Scintilla above!
1/3/09


Hi Venice said...
It is hard having my two countries so far apart and you are right it is sad for my family too. Expensive too since we cannot just 'pop over' to the other side of the world.

Hi Iain,
I do have 2 homes and I am very lucky in that sense. And your quote is spot on! 'Happiness is the journey, not the destination"

Ciao Leanne,
It sounds like you had a great time! As for your family they must miss you. In saying that though it is great that your staying committed to your life in italy. I thought l would drop by and say hello...so hello :)
All the best, lm looking forward to reading about your adventure's in the Canary Islands!
- Cleopantha
Ps. It looks like l will be in Positano again for the summer, been away for way too long!

I've been away from home for almost 9 years now, first doing the big OE then here in Italy for almost 5 years now. Most times going home I was pleased I wasn't back there for good but since having children i really do want to go back 'home' to live. The only reason i stay is because of my husband and his great job here. My friends and family don't really ask anymore when i'll be moving home, but at the moment, it is the main thing I want to do. It is so hard living so far away..... Maybe one day you will change your mind, and maybe that's what your mother etc dream of in their heads. Vanessa in Sicily.

Hi Leanne I totally relate to this one, especially to "Vanessa in Sicily", while it's all well and good when it's just the two of you once children come along that's when it's no longer about "you" anymore. I've been here in Praiano for 10 years and everyday I wish I could be back in Oz where my children would have a lot more opportunities than they have here i.e. school, activites, recreation, future in general. My husband simply refuses to even think about living somewhere else which of course makes me want to go back even more. Where I live on the Amalfi Coast is beautiful there's no doubt but day to day life is quite different. It's important to have a plan B if things don't work out. That's where I went wrong!
PS. My parents still hope that I'll go back for good one day.
Jone in Praiano

Ciao Cleopanther,
I cannot believe you will be back in Postitano. We must meet up as I will only be down the road! Please let me know when you arrive.
4/3/09

Hi Vanessa,
You never know...one day I may change my mind and I am sure this is what they are all dreaming of. How funny that since having kids you want to go ´home.´I guess that would really change everything. Best of luck with it all what ever you end up doing.

Hi Jone,
You are so right in having a plan B and I never say never but as you know I have not children...I´m not even married yet so who knows...things may change one day.

One of the things that I hate about leaving a certain place that I have visited is saying good bye to the new found friends. I really hate it specially if I know that I may never be able to visit them again or it may take a while... but hey, I guess that is life...