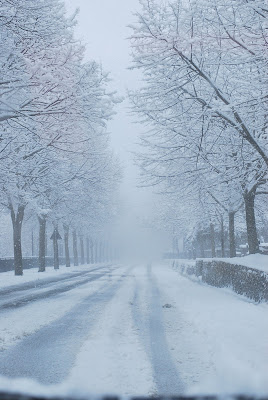 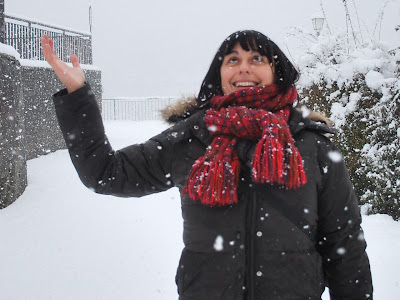 I was meant to go to work today but I didn't. Why? Well...we're snowed in up here in Malito - that's why! 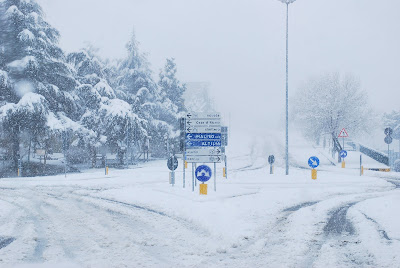 We went to bed last night with the rain quietly pouring down. It has been raining a lot lately, it's winter after all. Just after midnight we heard a 'bang' of thunder, and then all went quiet. We subsequently fell asleep.

This morning we woke up - and low and behold...this was the view as we looked out of the window. I have never lived in Malito for more then a few weeks, and it never occurred to me to buy snow appropriate shoes. I stocked up on winter boots when I was in Australia, but never thought to get some with well gripped soles - I forgot that it snows in Malito. This morning as we walked out of the apartment, I had to grip bel fidanzato's arm like an invalid as I squealed as I tried not to slip over. 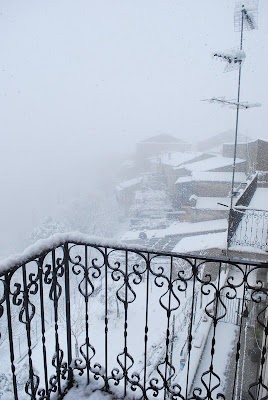 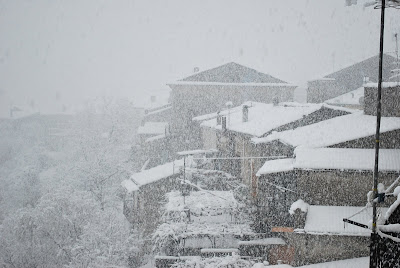 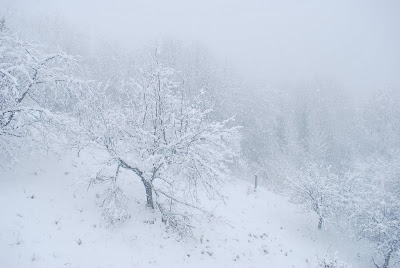 I am no slacker and wanted to go to work (also since I don't get paid if I don't work) but being Australian, I am not used to driving in snow. And not just a bit of snow, but snow that has been falling since the night before. Everything is under snow - even the cars. 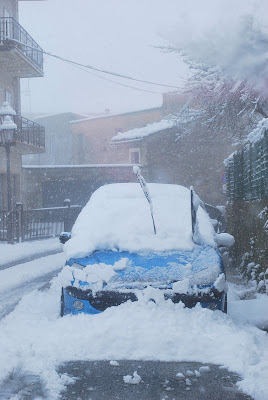 The roads in Malito were covered with snow, but I was rather determined to go to work, so bel fidanzato got in the car and decided to drive me around to see which was the safest road to take out of the village. We are after all some 700 metres above sea level so to see there was a lot of snow is putting it lightly! We got into the car and started to drive around in 1st and 2nd gear. At one stage the tyres started going crazy as the car could not grip the road and I was scared...we were not even a 1 minute drive from home! Eventually we made it out of the village but the roads just got worse and we were slipping and sliding that I had to call work and say that I was snowed in and could not make it! I would rather loose some money and still have my life.

So bel fidanzato and I went for a walk, played with my little friend and now I am sitting by the open fireplace as I write this, thankful that the snow has stopped, the skies have cleared a little and I may hopefully be able to drive to work tomorrow! 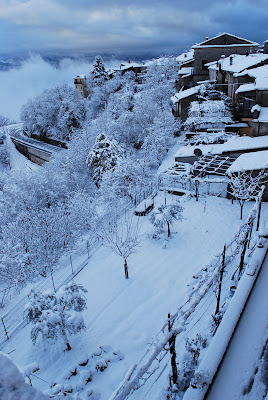 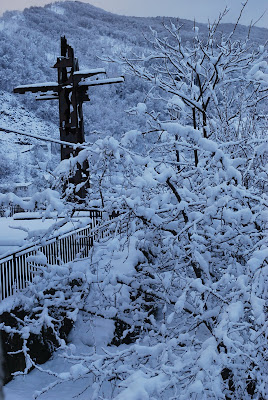 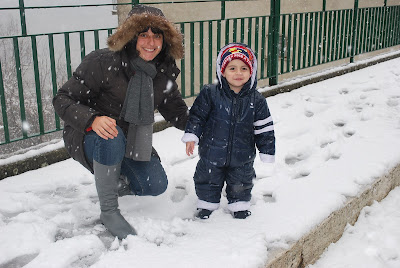 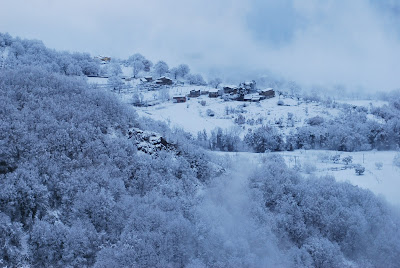 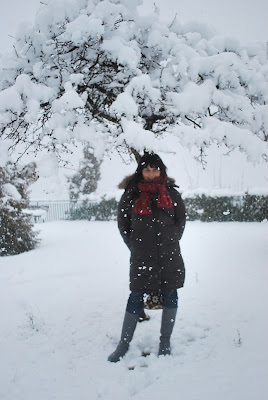 Posted by Leanne was in Italy now in Australia at Friday, February 12, 2010

Beautiful photos! What a welcome to an Italian winter for you.

I expect you heard that snow settled in Roma today for the first time since the mid-eighties!

Guess this answers whether snow falls in Calabria! We just had rain here. Boo :(

che bello! thanks for the pics- the village is just beautiful under the snow (easy to say from california where we're walking around in shorts and t shirts :)!!)
stay warm and roast some chestnuts!

I'm getting really fed up with being snowed in at this point. Once or maybe twice a winter for a couple of days in one thing, but we seem to be moving towards a fortnightly event now.

I'm think of buying a four by four with a snowplough as an optional extra.

It does look pretty where you are though.

Great snow photos! You have almost as much as we do in Munich.

Love the pics!! There is more snow there than here...which is not usual! Have you made snow-angels and snowmen yet?

Hi LindyLouMac,
I saw on the news that snow came to Rome. It looked beautiful there!

Hi Michelle,
If you are high enough up in the Calabrian mountains then in certainly does snow...and lots!

Hi Filip Demuinck,
Sure is more than enough snow!

Hi Carolina,
I am sure it snowed more when you lived here. Bel fidanzato says it used to snow lots more years ago.

Hi LuLu,
We made little snowmen, but too cold to contemplate snow angels. Your little village was covered in snow that we couldn't even see it from here.
15/2/10

What a change from Australian weather! It's a beautiful scene, not so good for traveling though. My bro bought my Dad a snowblower for an anniversary present. I think my Dad loves it more and more each winter! All the best!