Getting married to an Italian - Part 1

Many girls dream of their partner buying an amazing, sparkling diamond ring, getting down on one knee and popping THE question. In many countries this is a common custom, in other countries - Italy for example - it is not so common. This post is for to all of you ladies out there with an Italian partner, but also it's for any Italian men out their reading who have a non-Italian partner!

Getting engaged to an Italian is not necessarily how you imagined your engagement/proposal would be. Italian's don't really get engaged, therefore they don't understand the whole engagement/fiance thing. Take bel fidanzato's brother for example. He and his now-wife were going out for 18 years, and still living with their respective parents before they tied the knot last year. He never got down on one knee with a ring and outright asked her to marry him. It was just assumed and accepted after a while. The engagement ring come out a few months before the wedding when we went to the comune for the promessa.


When you have a boyfriend who comes from one culture, and you want or expect a certain thing (i.e an official proposal) you sort of have to spell it out. Bel fidanzato and I began discussing marriage quite some time ago. As time went on we talked about it more freely. I explained to him that in Australia the man has to ask the woman to marry him. I told him that I wanted a diamond ring and that he didn't have to get down on one knee, but he did have to ask. For me it was important, it was an official sign that he wanted to spend the rest of his life with me.

When we were recently back in Australia things got a little confusing as we had told my family to start saving money for our wedding (because it may very well be in Italy next year) and they got excited thinking we were engaged. I explained to them we were not engaged, but just to start saving the money anyway. After driving each other a little crazy, bel fidanzato and I decided that we should not talk about weddings anymore, as we weren't engaged! I had not been asked a question to which I could possibly answer yes, so enough was enough! All good in theory as I give good advice, but I rarely listen to myself.

So when we were un-engaged in Australia during the time when we did not talk about the big M, it was agreed that I was however allowed to try on engagement rings. One day I found the ring I wanted and that was that! 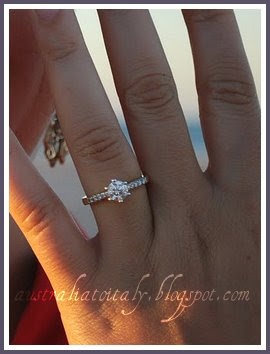 I am not a subtle person and made it more then clear that I had chosen my ring, and from that moment forth I would speak no more of the matter! We were down at the beach house with my aunt and grandparents and I knew bel fidanzato would end up buying the ring, and I knew he would ask me "officially" to marry him (as my family and friends had all explained the importance of the asking) but I didn't know when or how he would do it.......
Posted by Leanne was in Italy now in Australia at Saturday, April 10, 2010

Leanne I totally agree - you stand firm and make him ask you to marry him..lol

And I love the ring too!

What a pretty ring. In the UK it is still traditional in many families to ask the father of the girl you wish to propose to for her hand in marriage.

The ring is gorgeous!

I agree with you on the proposal thing. It is such a beautiful and romantic gesture for a man to ask a woman to marry him.

The ring is stunning! Congratulations to you both!!

love your posting! you got it sooo right! beautiful ring and congratulations again... :)

I love your ring.

Am also very jealous as the Sock Dropper just looks blank when I point out I only have one instead of a pair.

I've decided to be sneaky and get a new wedding ring with diamonds in it for our tenth anniversary since he can't see the need for two separate rings.

We were never engaged officially in the British sense, it sort of just happened.

Although he did go down on bended knee once, but he was exceedingly drunk and I was talking about dumping him because he had a psychotic mother, so I don't think that counts really.

The same thing happened with me, my husband never actually asked me, we kind of just decided and he never got me an engagment ring or got down on bended knee. We did however go and choose the wedding rings together that turned out to be too big and we have not worn them since the wedding day. I think some Italian men know all about how to seduce you but they haven't got a clue about being romantic, they need to be reminded, prompted and encouraged....

Come to think of it I didn't get asked formally either.
Did all this happen in Rosebud?

My husband didn't do the engagement ring thing either. Apparently they don't do that in the Netherlands either and to be honest I'd rather spend the money on something else (I was pregnant when we decided to get married so it was pretty obvious what we needed the money for!)

We'd been discussing getting married for some time but it was only after I got pregnant that I really felt like I wanted to be married. Husband didn't really care about marriage as in the Netherlands people don't seem to get married that often. Anyway he proposed over Indian fast food with another friend there - how romantic!

Anyway I can't complain abotu his un-romanticness as he came home with a dozen red roses today for no reason. :)

Hi Nuccia,
I did stand firm and alas he did ask me (although I am sure he regrets it now!!!!)

Hi LindyLouMac,
The UK is like Australia - back in the day the man used to ask the father first, but these days I don't think anyone does!

Hi LuLu,
You are right - it is romantic for a man to ask the woman...even if it's already decided you will marry, girls still want to be asked!

Hi Sarah
HA! You comment made me laugh!! I see nothing wrong with getting an anniversary ring with diamonds on it - as you know from my post I am all for taking the lead!

Hi Jone,
Oh, poor you - your Italian didn't know about the getting down on one knee thing, or if he did he thought it was strange to do.

Hi Scintilla @ Bell'Avventura,
It is rare to be formally 'asked' as most people I ask (well the people here in Italy) never got asked.
And yes - this all happened in Rosebud. He proposed on the beach whilst the sun was setting, but more about that in a post to come.

Hi Leanne - wow what a great blog.
My name is Laura Gallo I live in Toronto Canada and I was in Malito last year for the first time visiting my family....I loved it soo much that I've thought about it every day since I left last May.My family is so sick of hearing how badly I want to go back :). I traveled there with my twin sister, and we are both returning in the end of July. I will be staying till end of August - I recently lost my job after 16 years of working there. I would love to find a job in Italy but my Italian isn't very good :( I can understand it ok and we do comunicate with my cousins ok..... anyway would love to keep in touch and meet you once we arrive - can't wait!!!!!!
lauragallo1@hotmail.com

Thanks for sharing Leanne. I am really looking forward to part 2.

Hi laura,
Wow - so you know Malito well! Who are you related to here? I will have to ask around who knows Laura Gallo.

Hi Leanne,
My Aunt is Maria Galli and my cousins are Vince and Mena Galli, Mario and Renato Panno.
Lets keep in touch - me and my sister will be coming end of July and I will be staying to end of Aug....would love to get together once we are there....
lauragallo1@hotmail.com

I'm sorry but this is not true!! Engagement and rings is equally part of the Italian culture!! Your partner was not ready yet and you probably were pressuring him! You were played to believe some crap that Italian men don't propose!,

Hi Kat, I beg to differ as I don't know one single Italian who has proposed. If you understand Italian read the comment above from an Italian man living in the north. My husband was ready and i didn't pressure him!! We were already discussing where and when the wedding would take place but werent officially engaged. For some it's not important, but for me it was.

"Fidanzamento" exisits in my area (Milan and surrounding), but it's not "getting engaged" as we know it.

It's been two decades now and I'm yet to see an engagement in my community that bears any similarity to what I see back home.

My husband (of more years than I care to think about, where did the time go ?) was keener on marriage than I was (I had a touch of "once bitten, twice shy" going on). Yet by your measuring stick I was "pressuring" him and he "wasn't ready".... becuase we had different cultural expectations of proposal and engagement.

I still do not have an engagment ring.

But at this point I'd rather have a proper "just like the 70s" Kenwood mixer anyway.

Mind you, with our son's uni fees looming in the not too distant future neither diamonds, nor Kenwoods are likely to feature any time soon.