How to bottle tomatoes

A few weeks ago I helped bel fidanzato's mum, dad and brother with bottling tomatoes. Bel fidanzato was at work, but it didn't matter as it was a small operation. There were not as many tomatoes this year for a few reasons. One of the main reasons is that there is a cinghiale - wild boar - living in our future home! The old 'farmers' who look after the land have not seen this wild boar, but he leaves his horrible foot prints around, and has destroyed a lot of the crops. Have you ever seen a wild boar? Nasty things. I have only ever seen them in Sardinia and was very scared. They are dangerous and grow into massive beasts. 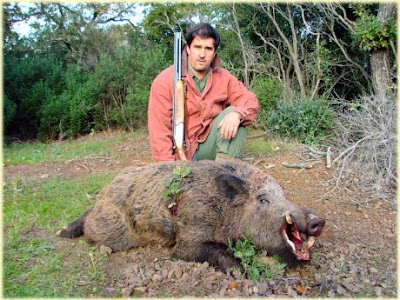 So, we had less tomatoes this year but more then enough to keep us going. When bel fidanzato and I eventually live in our future home, we will learn (from the old farmers) how to look after the crops and then hopefully watch them flourish!

To bottle tomatoes you first need to collect them and wash them. These tomatoes are not the perfect, round, bright red ones you find in supermarkets. They come in all shapes and sizes, often are ugly but the taste cannot be beaten! 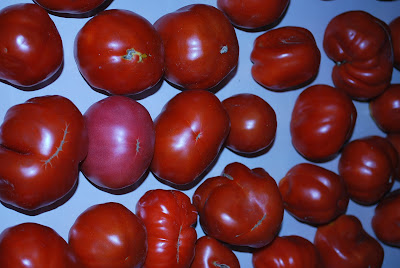 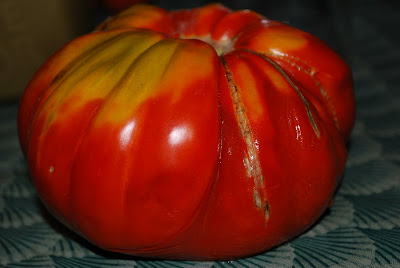 The tomatoes then need to be chopped up - not too small. Also keep the skin on them, no need to peel them or anything! You'll need to have some well cleaned bottles and a wooden spoon or something to push the tomatoes down with. 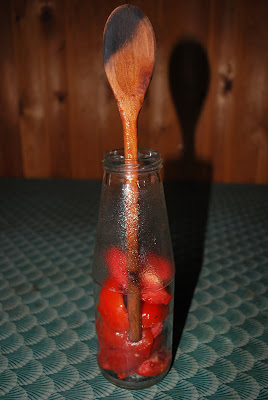 All you need to do is start putting the chopped tomatoes into the bottle, and use the spoon to help you push them down. Don't mash up the tomatoes too much by pushing with the spoon. If the tomatoes are really juicy you can drain a little of the juice out before closing the bottles firmly. 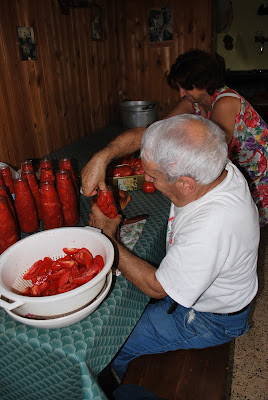 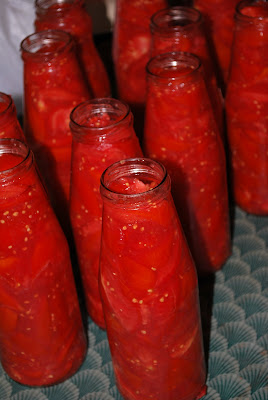 Once all the bottles are full you need to put them into a large container. You are going to fill this container with water and then boil it, with the bottles inside. We boiled ours over the fire place as we were at the country property. You need to boil the bottles for an hour or so, once the water has started to actually boil. There is no hard and fast rule though as I am sure ours were boiling longer then that! They then need to be left in the water overnight, and the next day you can take them out and store them away for the winter time. 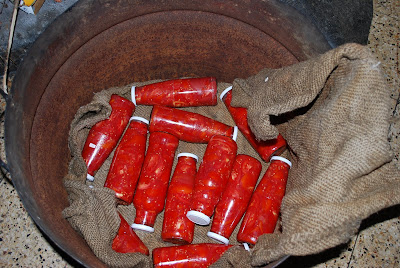 Easy really! Bel fidanzato's parents ofter bottle one or two bottles at home. Here in Italy, you find that friends, neighbours - who ever - just turn up at your door with crates of fresh tomatoes without warning. Bel fidanzato's cousin called us last night to come and collect some tomatoes from his plants as he could not get through them all. I've gone from never having picked a tomatoe in my life, to being quite the expert. You have to eat as many tomatoes as you can while they are fresh (so lots of tomatoes salads, pasta with fresh tomatoe sauce etc...) then not to waste the rest, just bottle one or two bottles of the remainder tomatoes at home. Bel fidanzato's parents are bottling a random bottle or two in the kitchen most days as the tomatoes are still coming in thick and fast!
Posted by Leanne was in Italy now in Australia at Wednesday, September 22, 2010

Yum those tomatoes look delicious (and I'm sure they taste that way, too). If only we could get such beauties in Germany...

H! I love it. You remind me of Looking for Alibrandi movie. I also can't believe that your bottling your own...I am super impressed. As for the 5 who are pregnant.....You, Melanie, Meg, Jess and another who shall remain a secret for a few more weeks! Just wait and see. All shall be revealed!

What did he shoot the wild boar with? It looks like a high powered rifle and I thought hunters were restricted to shotguns in Italy.

It is great to experience these old fashioned methods isn't it. Our neighbours do their boiling outside in an oil drum. I meant to take some photos this year but missed out as we were out with guests who were staying at the time.

What a shame you can't get yummy tomatoes in Germany!

Hi Gil,
Must confess I took this photo from the internet - it's not one of mine so I have no idea what they killed the horrible boar with!

Hi LindyLouMac,
It is great to experience and learn the old traditions.

Leanne, I tried to connect once before when I first discovered your post, but am unused to the site and wasn't able to track it. I too have a middle name "Michele" wild coincidence, but even more exciting for me is to find someone to report on my grandfather's birthplace and village. He left in 1898 for America. My family and I will apply for Italian citizenship next year since my grandfather was never naturalized a US citizen. His mother was a Gagliardi, his father a Francella from Paterno Calabro. He lost three siblings when they were very young and I am curious to know why. Was it Malaria? We have not been able to locate his father's death record. I enjoy your stories.

Do you have family in Malito now? Gagliardi is not really common, but not rare either. If you tell me some first names maybe I can tell you if I know them.

How very sad that you people look on animals as 'nasty'. They have every right to live. Humans are destroying the earth and have taken most of it. Where an God's creatures go. Not sure if this will be posted as it will probably be seen as 'nutty'! Thank God for organisations like WSPA who try to educate people. Enjoy your tomatoes!