The slowest, but cheapest builders in the world finally finished our roof last week and we couldn't be happier! They have cleared away all the left over material which was piled in front of the house, and now we can really picture how our future home will be. Renovations are now on hold while we save, save and save some more since the next project will be reinforcing the internal walls. We want to be involved with 'building' our house, so we bought some picks have started chipping away at the walls in the older part of the house. The main house is currently divided into two houses since the oldest part used to be a school until about 30 or so years ago. Bel fidanzato's dad used to teach there and a lot of the towns people went to school here. Back in the day there were many schools scattered around, one in the village for the children who lived there, and a few in the country for the children living there. In this photo you can see the 3rd house at the front/left, which will be left as is for the time being. I think this too used to be a school, but I am not sure. We have no money to do up this third house so for the time being we will concentrate on the main one!

The stairs you see in the photo lead up to what used to be the old school. 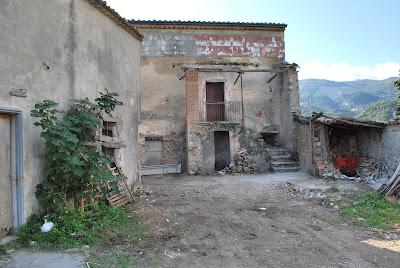 Under the stairs is just a little storage room and the other door you see on the ground floor may become our kitchen. We have no idea what rooms will be where just yet as we need to speak with the engineer who is doing the plans of the house.

This is an internal view of the new roof. We now have 3 floors, well I should say we will have 3 floors since once the walls have been reinforced we need to remove all of the floors and relay them since they are literally about to fall down in the old school house! We will also open up the walls somehow and connect the 2 houses to make them into one. 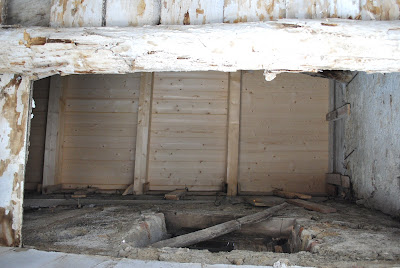 These are the 2 rooms which were the old school house. They need the most work, and we are chipping away at the walls until we reach 'stable walls.' When we save enough money, some workmen will come in and put some steal or iron rods into the walls and then cover them up again. Don't ask me why, how, what as I don't know really what's going on...I just chip away at the walls! 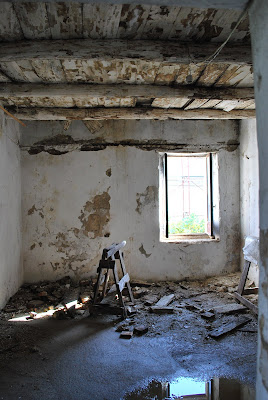 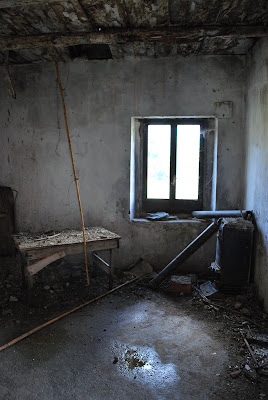 I feel like an archaeologist whilst chipping away as I discovered a wardrobe/bookshelf or something like that built into the wall which had been covered up. It could even be an old door connecting the 2 houses, but the old people who used to live in this house don't remember a door or wardrobe so it must be very old! The house itself, we are learning, is more then 200 years old. I discovered this ancient 'hole in the wall' since I only chip away at the 'easy' parts of the wall. Baby and I like to help bel fidanzato, but it can be hard work chipping away stone, so I find the softer parts which are surprisingly easy to chip away at. I also discovered a covered up fire place which you can see in this photo. It was easy to chip away as bricks were used to close it up. I then left bel fidanzato to chip away at the rest of the stone wall, while I moved on to other parts. 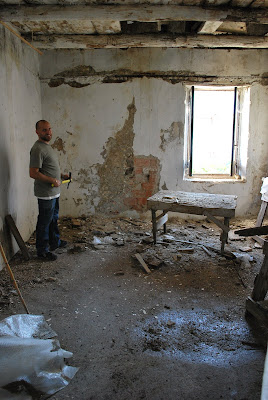 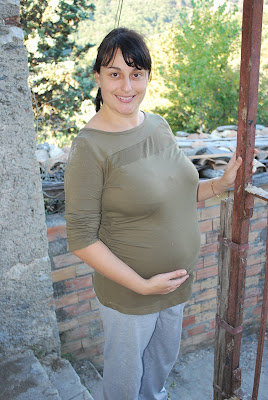 Stay tuned as there is much more of the house to come.
Posted by Leanne was in Italy now in Australia at Tuesday, October 05, 2010

Learning how and why my post isn't here?
You look great Leanne! Remember to eat plenty of veggies and keep exercising. For most diabetics simple lifestyle changes will keep insulin shots away.
You need a fund raiser to renovate your home. Looking great. I am reminded of the many books Frances Mayes, Eric Newby, and Michael Tucker who renovated or restored homes in Italy.
My grandfather left Malito in 1898 as a 4 year old with his mom after loosing three siblings and a father. To what? I suspect maybe malaria or cholera? Times were difficult. My Great grandmother was a Gagliardi, my GG Grandfather a Francella (Paterno Calabro). We also have Amendola, Bombini, Nucci, Macchione. And yes the Praiano's are from Maida.

Hard work but fun which at the end of the day will produce a wonderful home for the three of you. You are looking well Leanne. Take Care.

Hard work but fun which at the end of the day will produce a wonderful home for the three of you. You are looking well Leanne.

I’m new in this blog but I must say it’s a really Interesting blog and very innovative article.I like it very much, thank you for shearing.