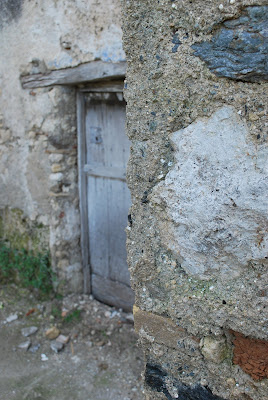 We have decided to stop working on the older half of the house, where up until now even I - very slowly - had been chipping away at the walls. We haven't finished, but thanks to bel fidanzato the majority of plaster has been removed to reveal the original stone walls. 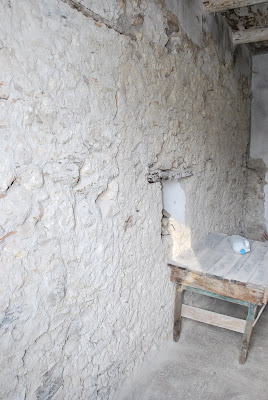 We probably won't be able to keep the walls as they are, they'll need to be re-enforced, but we should be able to keep parts as a feature. Bel fidanzato has also managed to rip away some of the wooden ceiling panels so we could get a good look up at the third floor. There are no stairs to access the third floor but bel fidanzato can get himself up there via the ladder and likes to walk around up there, thinking....making plans. The third floor has never really been used. If you recall, our house is actually two houses joined as one. There is a solid wall also on the third floor diving the two houses. I can't go up and walk around so have to be content at the moment with just gazing up. 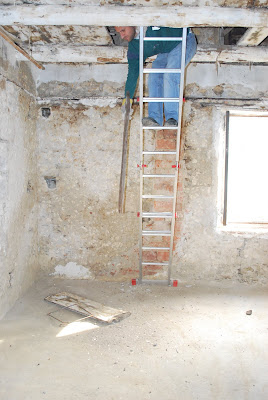 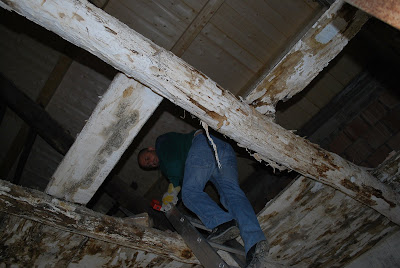 Our house is very big so we have decided to stop working on the parts of the older house that we won't be using in the immediate future. Instead, we will start working on the rooms that we want to live in.

Posted by Leanne was in Italy now in Australia at Sunday, November 28, 2010

Also I imagine it is rather cold to be working there at this time of the year anyway.

Hi Gil,
Yes, it is the way to go. We didn't think of that to begin with but oh well!

Hi LindyLou,
It is rather cold, but that doesn't seem to put bel fidanzato off!

We can so relate, when we sent pics of our house home to the parents in Austalia they cried...my Mother in Law sent an email to find out if we "really have dirt floors" We could see it, it took a while and a lot of progress photos to reassure them.
We lived in the house as we renovated and had two rooms as our base for 8 months (with a one year old and a three year old)! Fun Fun Fun... I just love to hear how you are going, piano piano...
-Lisa