I hope you all had a Merry Christmas! I spoke to my family who were enjoying an outdoors lunch in my parents backyard, sipping chilled wine in the 28 degree weather. My family celebrate Christmas on Christmas Day, whereas here in Italy most people have their main celebration on Christmas Eve.
It still feels a little strange for me celebrating on the 24th. In Australia, I used to wake up on the 25th and Christmas had started. When we were little, the first thing we did was run to the Christmas tree and tear open the presents that santa had left. I never wondered why mum and dad never bought us anything - it was always just santa! As we got older, and mum and dad, rather then santa gave us gifts, we would wait a little longer until opening presents. Normally we woke up, ate breakfast, a little later opened presents and then had a long, leisurely lunch.
Here it feels strange that I wake up on the 24th then spend the day preparing for the evening meal. By the time the evening actually comes I am tired. If you've celebrated Christmas on the 24th for your entire life, then I am sure the 25th would be strange, but for me it will take a few more years to get used to. When I was in Australia last Christmas, I made sure to buy a few Christmas cds so at least we had some English festive tunes whilst preparing for the Christmas dinner. 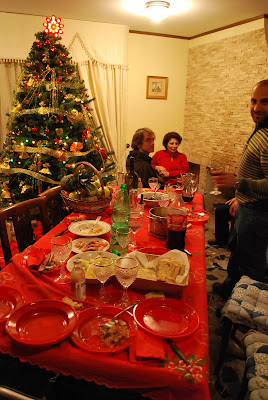 This year we celebrated with a dinner at my in-laws. As you can imagine, we had a feast, course after course after course. We set the table in the dining room. lit the fire and ate the night away. It was surreal for bel fidanzato and I that this would be our last Christmas 'alone.' It's still a bit hard to believe that next Christmas we'll have a little baby crawling/walking around trying to pull the decorations off the Christmas tree! 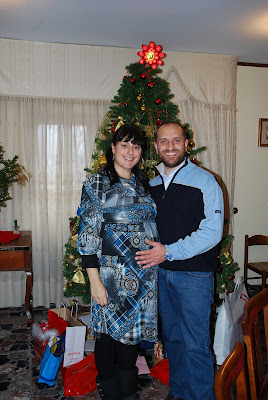 Whilst I passed my day cooking - ok, I did just a little bit of cooking and a lot more resting, (I'm 8 months pregnant don't forget so may as well take advantage of this special treatment!) bel fidanzato spent the sunny, warmish morning preparing for the annual bonfire. Here in Malito they have a big bonfire in one of the piazza's on Christmas Eve. Unfortunately after bel fidanzato and his friends spent the day preparing the food and wine and piling up the wood, the weather turned nasty.

The skies opened and it started to rain, really rain. It ended up raining for the 25th and 26th too. Not only was there rain, but fierce winds, so the bonfire obviously could not be lit. 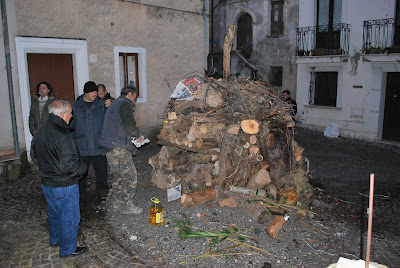 It was a shame, but alas one cannot argue with mother nature. Rather, while most people headed off to midnight mass, bel fidanzato, his American cousin who was visiting, and I went home and pretty much went to bed!

On the 25th we returned to my in-laws to open our presents and eat the left overs for lunch. It rained the whole day, but by early evening we were getting a little fed up, so decided to brave the rain, and take the American cousin to Panettieri to see the navity.

It was lightly spitting as we drove up the mountainous roads, and we laughed as the car thermometer told us that the outside temperature was literally dropping by the second as we went higher, and higher up into the mountains. We stopped laughing when the light rain turned into snow and the mountainous roads started to turn white. We decided to turn around and head back down the mountain. Probably had I not been 8 months pregnant we would have continued regardless of the weather, but the roads up in that area are isolated and dangerous, so we didn't want to risk getting stuck in the middle of no where! We ended up going to a town closer to Malito that also has a nativity but it was not as professional, or beautiful as Panettieri.

Finally, by Monday the 27th the rain stopped and the bonfire could finally be lit. It was a god send as once the rain stopped, the temperatures dropped so it was lovely to stand around the enormous outdoor fire. 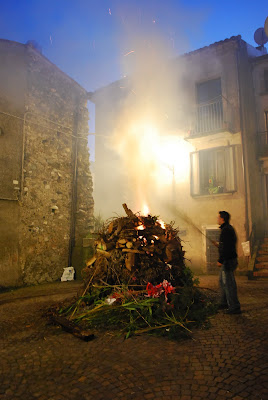 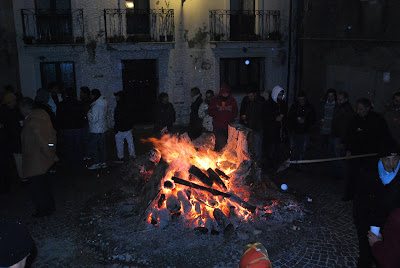 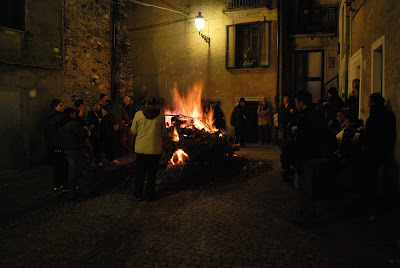 Posted by Leanne was in Italy now in Australia at Thursday, December 30, 2010