I feel as though I live on a live movie set sometimes. The things people do and say are often so funny, so stereotypical that it's hard to believe it's actually true. Since the birth of bel bambino we have had a steady flow of visitors. Those that don't come to the house to officially visit stop us in the streets when we are out and about going for a walk when the weather permits. (Yes, I know, shock horror that I can take a new born baby outside so soon, and in the middle of winter too!)

When people aren't asking me if I breastfeed, they are pointing their fingers inches away from bel bambino's face as they say "benadica!" which means bless. The pointing of the fingers comes when they utter a compliment or two, since he is after all the most beautiful baby in the world. Now I am not talking about any old finger pointing here. I am talking about this finger pointing: 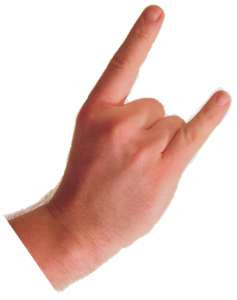 This finger pointing is le corna which translates as the horn. It is a sign to ward off the malocchio, the evil eye since giving a compliment to a person can cause them harm. If people don't want to point their fingers inches from the babies face, then one passer by said "che brutto!" with a smile on her face as she looked into bel bambino's angelic face. Now, I am assuming she didn't really mean that bel bambino was ugly, but she didn't want to compliment him cause of this evil eye thing....or maybe she was just a rude old person who thought he was nothing special...but no...I am sure it was not that!

Another tradition is that some people have given us gifts of coffee (a bag of coffee beans, or ground coffee in a pack.) I have no idea why, and have asked bel fidanzato and his mother, but neither of them know why people give a gift of coffee. It's a useful gift however as one can only have so many baby clothes.

Living in a small village is rather comical at times!
Posted by Leanne was in Italy now in Australia at Friday, February 18, 2011

Labels: having a baby in Italy, village life

Only coffee??? They should be giving you packs of sugar too!!! :) All i know is that after someone has been sick or been to hospital they visit you at home and have to bring coffee and sugar but i didnt know it applied to when you give birth aswell!! Ahhh the good old superstitions!! One year when i was in Calabria i wasnt going to be there to see my cousin give birth so i wanted to give the babies present before it was born and all my other cousins were saying : Nooooooo way you cant do that its bad luck!!!! Only after it is born!!!" So i had to leave the present to my other cousin to give when the baby was born!!! But the 'corna' business is pretty big in Calabria.... i find myself doing it all the time!!! Anyways hope all is going well take care!! xoxoxo

Yes coffee and sugar is common - my mom used to do this alot when I was growing up (along with a gift) & when I asked her about it she said it was tradition. I think it had something to do with having enough coffee to serve all the visitors. Remember, everyone was poor back then so coffee was a treat. And baby clothes were often made. Gotta love Malito!

Good to know the devil has been well banished and L love the idea of you being coffee as a gift.

Love your posting on these traditions! I often wondered how many homes certain packs of coffee had traveled :)!
Another tradition that I actually use now in my home is the first time a newborn visits your home, you tuck a cash gift into their blanket. I was so confused the first time it happened and didn't want to accept the money, but then realized how important it was to the hostess. Now here in CA, I tuck a little something into baby's blanket when they visit us too!
Oh, and when the baptism comes round and all the gold little Anthony will receive! Amazing...My boys have built up quite a stash of chains, crosses, bracelets, crosses, etc over the years. I've never had so much gold in my life!
Benedica davvero!

I came across your blog and was so excited reading it. You made such of big change moving from Australia to Italy and seems like you love your new life. European traditions are so popular but somehow little bit annoying since you have to follow them. I remember myself living in Europe all the time I had to follow my family traditions does not matter if I like it or not. Congrats on your baby!! Anyhow, hope you will have some time to visit and follow me at: http://pfinusa.blogspot.com , www.pfinusa.com Regards, Terrans