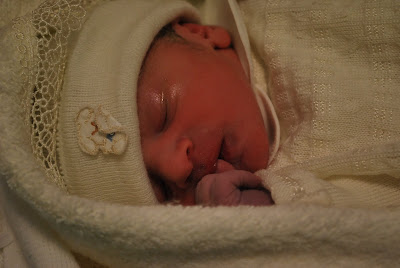 This is our little boy when he was about 30 minutes old. It was a strange experience having a C-section...I went into the operating theatre all alone, I was naked since they don't give you a gown or anything to wear, and felt a little self conscious as I was sitting on the bed/operating table waiting to get my epidural. I have never seen such a massive needle in my life and was scared so asked one of the nurses if I could hold her hand. Thankfully she said yes. The nurses tried to calm me down by making small talk which I appreciated.

I felt a little nauseous the table since my head was tilted down a little lower then my body. A cover was placed on my chest and a small curtain up and over my stomach so I couldn't see them hacking into me. Above me however was a large light which clearly let me see the reflection of my open stomach. I made sure not to look up, but rather looked at the nurse who was holding a tube which softly blew cool air onto my face (to help with the nausea.)

The sensation of having doctors pull a baby out of your stomach is a strange one. You can't feel the pain, but you still have feeling. I felt them tug the baby out, and then I looked over to my right as they said "this is your baby" or something along those lines. If memory serves they were holding him by his feet and he was purple. I can't remember if he was crying. I didn't actually feel anything, no emotion as it was a surreal experience. They don't place the baby onto your chest for skin to skin contact, instead they whisked him off into the other room for his check-up and to clothe him.

A few moments later, a screaming little baby was again briefly brought into the room, again on my right hand side and they bent him over me a little so I could give him a quick peck on the cheek. Then he was gone.

Bel fidanzato was waiting for me outside of the delivery rooms and he later told me how the door opened and a nurse came out pushing a crib with a small baby in it. He only realised it was our baby since they had my empty bag in the crib. It was the bag with his change of clothes etc...and if it hadn't been for that then who knows if they would have told bel fidanzato that this baby was his! Normally they call out the father's name, but for some reason this nurse didn't. The baby then was sent to my room to await my arrival. By this stage there were a few members of the family waiting for us, and they eagerly followed the baby into my room while bel fidanzato waited for me to exit.

By the time I got to my room about 20 minutes had passed and I was - not angry - but a little disappointed I guess you could say, disappointed that everyone had seen the baby, touched the baby, kissed the baby - before I had even had a good look at him! I had no idea what he looked like yet all these other people had.

At least he was fine, in good health, a little on the smaller side but perfect in every way. Now that he's home he's already getting little chubby cheeks and is the most beautiful baby in the world! 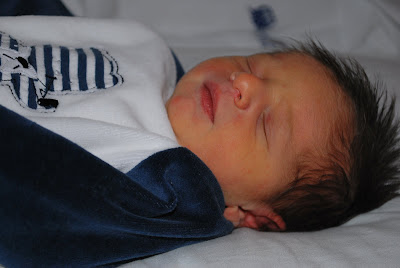 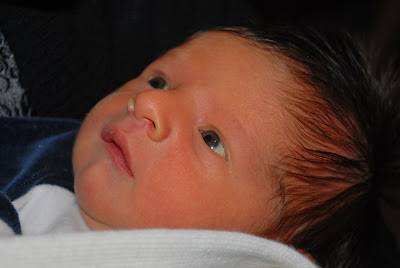 Posted by Leanne was in Italy now in Australia at Wednesday, February 02, 2011

Congratulations he is beautiful!!! You handled this whole pregnancy in Italy better than I would, after reading your posts I wanted to slap a bitch or six. You did great and I admire you.

Congratulations! What an ordeal you've been through. I hope mamma and baby are resting comfortably at home.

Congratulations to everyone. Welcome to your beautiful son. Very Italian with such a mop of hair. Enjoy every moment of motherhood and take it easy.

He is just adorable Leanne, perfecto!

He's so perfect Leanne! I completely understand your feelings, especially after all you went through...you kinda wanted those first moments. But I'm glad you accepted it and were able to express yourself on this blog. Thanks so much for letting us be a part of the experience. Baci Baci

@Sunday, GIRL! that was too funny.

Congratulations, from down under, on your new son . He certainly is a beautiful boy.

Congratulations! Sure looks like he was worth all of what you had to go through. My wife had to have a C section at the last minute and everyone on the floor was allowed to watch the surgery, from the observation room, but me. I was hurt that the nuns let the cleaning lady watch and not me. My anger ended the second they wheeled our daughter out of the room.

He's beautiful! Congratulations to you and Bel Fidanzato!

I am so happy for you all, warmest Congratulations xx

Have been following your blog for a while now and want to add my Aussie Congratulations to all the others. Your son is quite the handsome one.

I've been following your blog for as long as I can remember Leanne! Your updates make my day a little bit brighter. What a beautiful little man you now have. Congratulations!!

Congratulations, he's a beautiful baby!! Thank you for sharing your birth story - any birth is hard but yours is particularly anxiety-provoking. Congrats too on holding it all together, in a second language to boot. I had a C-section too (in NZ): you put it very well when you said you can't feel pain but you still have feeling - so true and so weird! All the best to the three of you.

Hi Sunday,
HA! I wanted to slap many a person at the hospital...

Hi Sara,
Baby and mamma are doing well, and resting as much as one can with a newborn who wakes every 3 hours to eat!

Hi Diane Terrazzino,
He has so much hair it's just amazing!

Hi Yvonne,
He is a little cutie, and it's not that I'm biased or anything ;)

Hi LaLa,
You're welcome! And Sunday was just too funy :)

Hi Iain,
Thanks for the warm wishes.

Hi Gil,
The cleaning lady got to watch and not you! Gosh, I'd be pretty upset too.

Hi LindyLouMac
Thanks for the warm wishes.


Hi Sarah Elizabeth,
Thanks so much :)

Hi Heddi,
So you know what I mean about the C-section...strange isn't it?

Sorry I'm a bit late in offering my congrats to you all. He's gorgeous! Having had three C-sections I can totally relate with your feelings about everyone seeing your son before you! So strange!

I'm sorry I'm so latre but he is beautiful! Congratuations Leanne!xxx