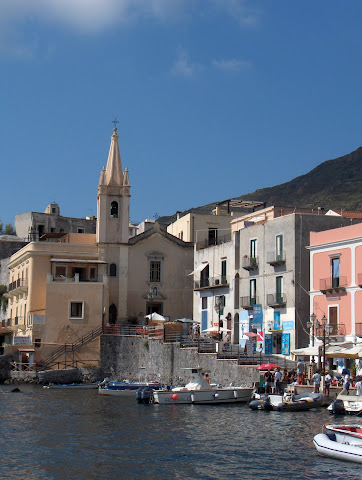 Isole Eolie - 7 islands off the north coast off Sicily:


Lipari is the largest, and considered by many to be the prettiest of the islands, but I think I prefer Panarea. I visited Lipari for the first time 4 years or so ago with my twin, her husband and his sister. We had come over to Italy for a 2 week holiday from London (where we were living) and spent a few nights in Palermo, Taormina and Lipari. 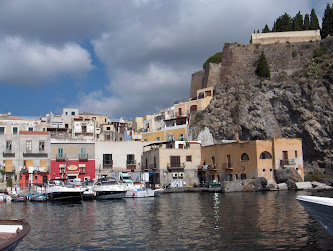 4 years later, on my day off I went back to Lipari, about 2 weeks ago. I was sick of always going to the same beach here so decided to join the day tour with some of my customers, who thankfully don't often recognise me out of uniform. At 6.45am I left Taormina and spent a beautiful day re-exploring Lipari. It is funny how much you think you have forgotten about a place, and then once you are there all the memories come flooding back. 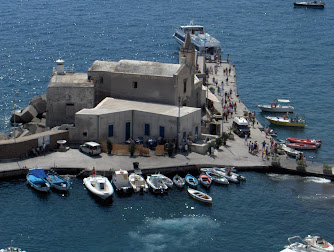 The second island we visited was Vulcano, which I too had done as a day trip 4 years ago from Lipari. Vulcano is as the name suggests a volcano. It is also famed for its therapeutic mud baths (very popular with the Germans).
I braced myself as I exited the boat for the smell that I knew was soon to assault my senses. This time 4 years ago I nearly dry-retched as we first arrived, the sulphurous fumes are inescapable... Gripped with this memory I was fine, and actually could not help but laugh at the fellow tourists who were shrieking and blocking their noses.
This time around I opted out of relaxing in the mud baths. As nice as they are, it takes days to get rid of the rotten egg smell.  I opted instead to go and swim and sun bake on the black sandy beaches.
I do love living in Sicily!
Posted by Leanne was in Italy now in Australia at Friday, August 31, 2007