Labour Day - well for some

Is is a public holiday yet again in Italy today - Labour Day - and as I write there are hundreds of thousands (500,000 claim one newspaper) of people at San Giovanni for the annual free music festival. (Also live on RAI Tre) I have no intention of going as I nearly fainted by the Colosseum this morning as I stepped out from the metro - hoping to take the bus - only to discover that Fori Imperial and Via Cavour were blocked off to traffic as thousands of flag waving 'marchers' were beating drums (or saucepans) and chanting, blocking the path for us poor mortals who have to work on Labour Day!

After fighting my way through the crowds, waiting hours for a bus (it felt like hours) then getting squashed on the metro yet again on the way back from a hotel I decided that the last thing I could face was to go to a free concert, where people had begun to arrive at 6am this morning (Well if you want to be up the front, you need to pay the price.)

Bel ragazzo wanted to go but is too tired from working early this morning, so I have said we can watch the concert on the TV, put the volume up really loud, dance around and I can push him and throw bottles on his head, kick him, elbow him in the face, maybe knee him one - and then it will be like we are really there! 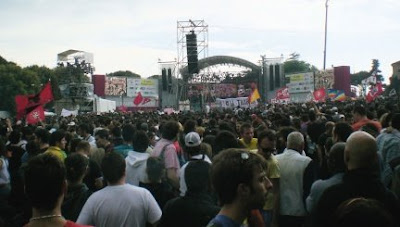 Posted by Leanne was in Italy now in Australia at Thursday, May 01, 2008

Very crowded here too today, I have skulked around the edges, avoiding the crush best I can.

Hi Figcharlie,
I know what you mean!