Last night bel ragazzo and I had dinner in a lovely restaurant across the road from the Colosseum. I had a group of 26 guests here for a tour of Rome and Sorrento, and although I am not in charge of looking after the group I couldn't say no to a free meal in a nice restaurant...so off we went to join the tour guide for dinner.

The customers that partake in these tours are normally in their 60s, all middle to upper class and quite 'English' if you know what I mean (no offence to those Brits reading this!) Just as they were sitting down to a nice dinner commotion broke out across the road. The street around the Colosseum is normally open to traffic but on this occasion it was cordoned off and there were many police vans. Thousands of mostly young people seemed to have appeared from no where and the loud (really bad) techno music began beating out from some invisible sound system.

"Oh, what's going on?" The customers asked, looking around.

"Will the Pope be involved?"

"Is it a political protest?"

As the bruschetta was being served the army of police in vans and on foot started to move across the road and the techno music became louder and louder as we discovered its source. A massive truck with a banner on the front saying (in English) Million March Marijuana. was slowly crawling up the street. There was a make shift dj on board, a bar and lots of people all dancing, smoking and drinking...the noise was more then we could bare as the techno music was REALLY loud and really bad, and only became worse as we realised it was a procession of trucks each with their own dj, some with giant inflatable bongs, all painted with marijuana leaves, and all crowded with stoned groupies who were marching/dancing for...well we are not sure exactly...I think it was an excuse to have a free dance party so they could all smoke in public.

Luckily the customers were seated inside whereas we were on the road side tables. I couldn't resist going inside and letting them know that the protest definitely did not involve the pope.

Bless one of the older customers "Can we have some marijuana too?" When the meal was over and he was headed back to the coach, tucked nicely under his arm I spied a bottle of wine from the dinner too.

Every day practically there is a different demonstration here in Rome, and they are always by the Colosseum which is annoying for me as I normally get off the metro there! Here are some pictures from last nights Marijuana March (sorry they are not so clear) and below are some pictures from the Labour Day demonstration that I was trapped by the other day...what's next..chi lo sa? We are off to Calabria tomorrow so will be free from Roman protests for at least a few days. 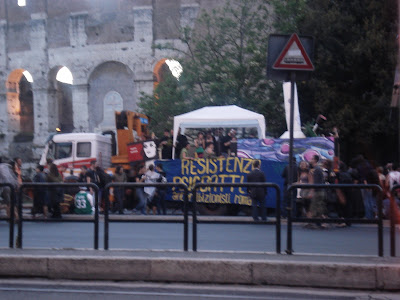 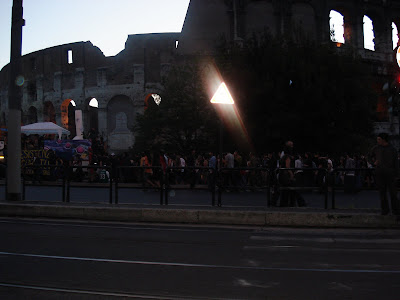 And from Labour Day 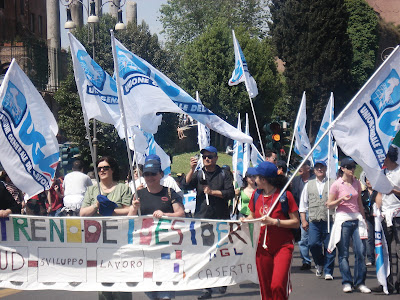 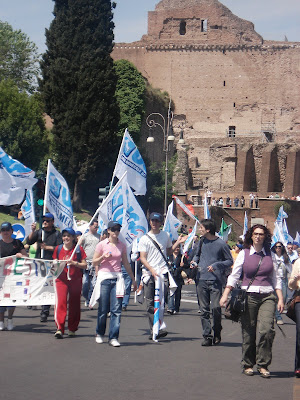 And going through my old photo's I found pictures from other random demonstrations when I lived here 2 years ago before my blog was even born! 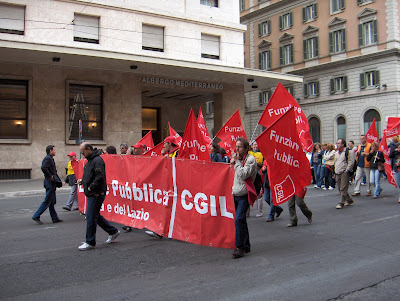 And this was not a demonstration but they did block off the entire city when the president Giorgio Napolitano was elected. This drove me MAD as I wanted to go home and could not cross the road as it was all blocked...I remember having to wait for ever until the angry mob broke through the barrier and I joined them, making the dash for freedom! 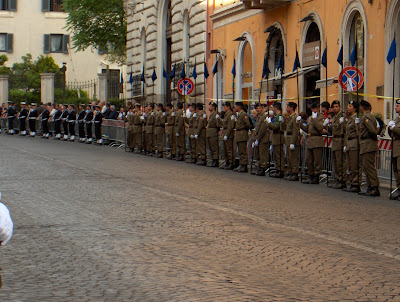 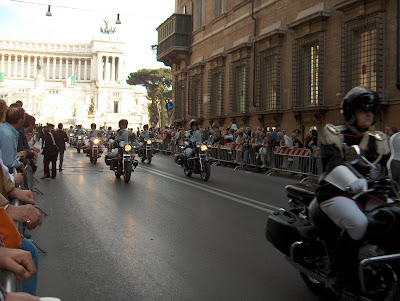 Posted by Leanne was in Italy now in Australia at Sunday, May 04, 2008

Hey girl we will be staying at the
Prime Hotel Villa Torlonia , 5 -20, and I know you are gonna be busy, but if your giving any tours at that time let me know, just ask for the freemans :) at the hotel

A marijuana march is something I could really get down with.

Hi Tanny,
Although it may sound like it, I am not actually a tour guide! You'll have a great time here I am sure - nice weather at the moment too.

Hi marijana+music=love - the marijuana march was more like a free dance party really - except with police escorts!