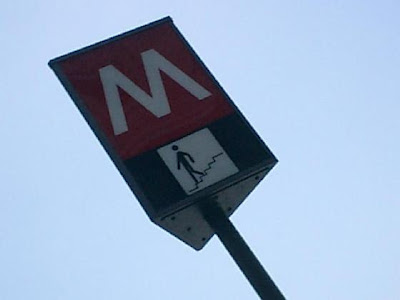 Rome has perhaps the worst underground metro system in the whole of Europe. It is ugly, smelly, dirty and plain embarrassing for a capital city if you ask me. I have travelled through most of Western Europe with a little of East and Northern Europe thrown in and even lived in London for a few years so have seen many underground trains in my time. In my opinion the Rome metro is the worst and there is no wonder why there are so many cars and mopeds on the road. No one wants to travel on Rome's public transport unless they have to! 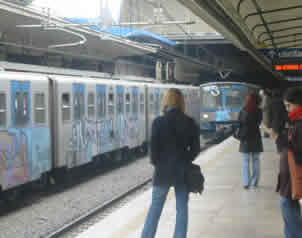 Currently we have ONLY two operational train lines A and B which do not even begin to cover most of the city. I know...I know - Rome is old and every time they dig down they discover some more ancient ruins so have to stop building. I know. But come on! Find a solution. Put some more trams on the roads then, above ground.

So we have Line A and Line B. Line A is not so bad as it is the 'tourist' train dropping thousands of sun burnt and soon to be pick pocketed people off at well known places like: Spanish Steps, Vatican City, Trevi Fountain. These trains are air conditioned, open and spacious with television screens showing some local information. The television keeps the locals awake as the jostle with the weary travellers to get a comfortable portion of space on the crowded trains...and sadly often the television distracts the weary tourists who look up at the pretty pictures on the screen rather then look down at the beggar whose hand is inching closer to their bulging wallet.

So fairs fair...Line A is Ok. Once you are in the train that is.


Line B however leaves much to be desired and sadly my closest station is on Line B. 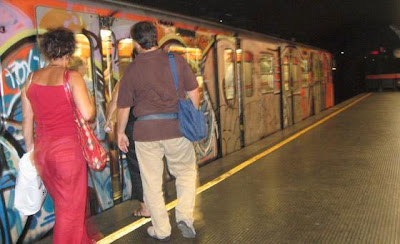 Line B has the old, hagged trains that are full inside and out with graffiti...on the doors, floors, windows and roof. FULL. There is no air conditioning, not unless you count the filthy open windows blowing the polluted air from the underground tunnels into the carriage. Since there is no fresh air then you can imagine the smell, fresh urine and sweat comes to mind. You can imagine how joyful it is (note the sarcasm) to travel on these trains countless times everyday, when they come at infrequent intervals so that you have to be squashed on like a sardine, with your face shoved into the sweaty and deodorant-less armpit of a gypsy family who then start to screech at the top of their lungs asking for money. 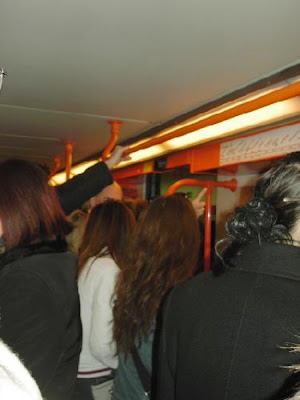 How pleasant - yes. I especially love it when I leave the house, freshly showered (with deodorant) and my work uniform nice and clean...only to then be on the metro in the above conditions for 20 minutes to finally jump out at the termini station, sweaty to the bone with my hair plastered to my face and wondering where my deodorant has gone.

If the train journey itself is not bad enough the stations here are mostly underground so you have to walk down countless flights of stairs, through low tunnels that have these harsh fluorescent lights and NOT AN OUNCE OF AIR CONDITIONING. Not one little bit. Sometimes, with the stations like Flaminio and Spagna you seem to be stuck in these underground sweat box tunnels for what seems like hours as you battle through the crowds without being able to see the outside light. Oh, how I miss the London underground which had a way of making you forget you were so far under the earth! 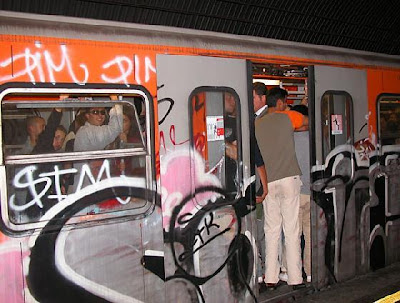 Posted by Leanne was in Italy now in Australia at Thursday, June 26, 2008

Amen! I couldn't agree more! The metro is probably the biggest reason I didn't look for a job here, that and the trains which is a close second. The idea of spending 40 minutes on a train then transferring the horrid metro every day, twice a day, made being poor more attractive. When I saw human feces inside a train on the B line I swore I would never take it again. You just have to draw the line somewhere. Luckily in Verona the bicycle will be my new best friend!

Very shameful indeed for a European capital! I usually avoid the metro like the plague and am lucky enough to live in a neighborhood where I rarely have to use it... but when I do need to use it, it's a thoroughly unpleasant experience.
Next week I'll be commuting to Tiburtina and i am NOT looking forward to it at all. The trenino is a bit cleaner but the general experience is just as nasty and inefficient. Makes me wonder WHY I agreed to take this office-based job for a week =(

Hi Jessica,
I cannot believe you saw feces in the train...actually no...I can believe it. I have only ever seen human feces at the Tiburtina train station...hmmm... At least you are going to the lovely Verona!!!!

Hi Romamericana,
Ahhh..cannot believe you have to commute to Tiburtina. I have to go there tomorrow night at middnight! It is horrible there...see my notes above!

My first trip to Rome I took the metro twice. The first time it wasn't crowded at all but it did smell like urine and I remember all the graffitti. The second time I felt like I was in a can of sardines! It was so packed. I held on to my purse for dear life. When I lived in New York it was sort of hit and miss. Some stations were clean, some weren't. I did see my share of rats though and I did see a prostitute turning tricks in between cars. I think I might have vomitted if I had seen human feces...that's just sick!

When I'm not on maternity leave I take Line A to work every day. We're lucky enough to live right near a metro station and my work is a 5 minute walk on the other end so it's not so terrible. On Line A lot of the trains have air conditioning and they look a lot less "New York in the 70s" than the LIne B trains.

But it is really shameful that a city of nearly 4 million only has 2 metro lines. Sydney is not known for its public transport either (and its about the same size in population) and it has quite a reasonable train system. And I was completely spoiled in New York and Moscow!

I think the moped is a really Italian solution. The public system which we pay amazing amounts of tax euros for fails completely - so everyone turns to a private solution (the moped or car) just to exist. Only problem is insane traffic and parking.

Ciao Piccola,
It is sad that the tourists have to take the metro too. Sad for us that we live here, but sad for you as helps make an impression of the city. At least I have not yet seen a prostitute turning tricks (well not yet that is!)

Hi Kataroma,
I was spoilt in London so I know what you mean about cities that DO have a good system. And at least you can be on Line A which is not so bad, but I just cannot cope with the tunnels to get you down that low. It is like mine shaft not a metro station.

Thanks for the lovely comment you left on our blog. I can't help feeling sorry for you with temperatures of 40 degrees, packed in an underground train. I used to do the same in London and never want to do it again... That's the plan anyway!

Hi Amanda,
London used to get hot too but at least the trains were clean, new and people did not seem to use it as a public toilet!

HI everyone, just a quick suggestion if you're planning to visit Rome again despite its awful metro;) please check out vacation rentals in rome to find a perfect accommodation...ciao