My friend - the electric bus

You have heard me moan about the filth ridden underground metro systems here in Rome, so now let me tell you about my favourite form of transport: the little electric bus. 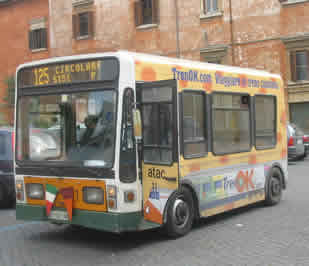 I first saw this little bus when I was living in Rome 2 years ago. I stumbled across it by chance when a friend and I were having drinks in Trastevere. We were in one of the small cobbled streets, having an aperitivo when this little bus drove by. It was almost silent, and it was so cute it looked like a children's toy.

It would be some time before I actually took the bus, actually I cannot recall taking it before this year as I used to live a little further up the tram line from Trastevere so never had need for the electric bus. This year I began using it to get from near the Colosseum to Piazza del Popolo. It goes along the back streets where no other buses can go, and since I hate the metro and get sick of pushing through crowds of holiday makers, the little bus became my friend, my salvation.

It only has seats for 8 people and then a few people can stand. It runs on a battery power so is green and clean and is a still a novelty which has not warn off. And best of all is that the bus starts and ends in the piazza where I live! So now I always am going to be guaranteed a seat. (Even if I have to sit next to a vile, smelly, filthy gypsy like I did today, but sorry...I am giving up my seat for no one! Not even the foul stench of the gypsy could make me move.)
Posted by Leanne was in Italy now in Australia at Thursday, August 07, 2008