My move to Italy Part 4 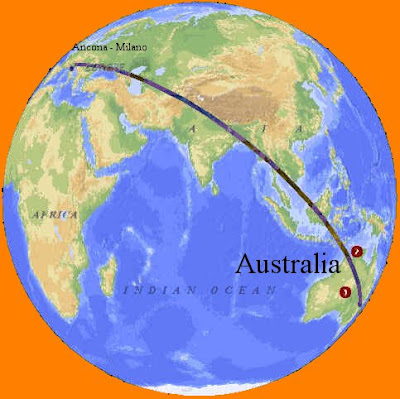 Where did we finish up the other day? Oh - yes, when I decided to go to Italy for a 6 week holiday.

I was so excited leading up to the trip, I could not wait to go back, to leave the Australian winter behind and have some sunshine in Italy. I was so miserable that I needed a good bit of cheering up! Before leaving my twin sister had planned and booked my itinerary (this was not because I am lazy - she had to do it for me as I was so excited I could not decide where to go.)

So off I went: Sardinia, Lake Maggiore, Rimini, Perugia, Vieste (Puglia) and then for the first time down to my dad's village in Calabria...and well...that was that.

Now hold on a minute! Don't start getting ahead of me... I said that I went to Italy for a holiday. I am not so 'fly by the seat of your pants' that I just stayed there! Don't forget I could not speak the language, I had all my things in Australia and I had my ticket to fly back.

Something however had changed the moment I stepped off that plane in London. I felt as though a weight had been lifted from my shoulders, I felt free, I felt happy. When I flew to Italy the next day I just knew that I would not be going back to Australia. I knew that I had to live in Italy. It was as simple as that. It felt as if I had no choice and that there was something pulling me, urging me to live there.

I had a whirlwind 6 week holiday and had to break the news to my twin sister and my aunt over the phone that I was leaving Australia yet again. (I was not intending to tell them over the phone...but it just happened - when I called my aunt I didn't even have to say a word as she knew what I was about to say!)

So I left Italy with a happy heart knowing that I would soon be back...but still not straight away. The pieces had to be put in their places first.
Posted by Leanne was in Italy now in Australia at Saturday, August 09, 2008

Hi Leanne, I came across your blog in June and I just wanted to tell you how much I've been enjoying reading your posts and I am loving reading about your move to Italy. I can only dream of moving from Oz to a foreign country.

I hear you, Leanne. Things have to fall into place for something like this to happen!

Hi Jewel,
I'm glad you enjoy the blog! So you are a fellow Aussie too? Nice to "meet" you.