Picking up the tourist pace in Rome

The Rome tourist season is always alive, but we are now backing out of low season and making our way up to the high season once more. Rome is the opposite to most other resort towns as the summer months of June, July and August are normally peak season with prices soaring in places like Sicily, Adriatic Coast etc... as the hot and bothered head to the seaside, or the mountains to escape the summer heat.

Here in Rome however you will find the prices drop considerably, especially in August. We have had some of our 4 star hotels offering rates comparable with a single room in a youth hostel - seriously - that cheap. If you can put up with the heat, humidity, lack of places to cool off and having not even a bit of fresh air then maybe Rome is the place for you in the blistering summer months!

It's not for me, and I hope, really, really hope that this is the last summer (or winter for that matter) for the bel ragazzo and I in Rome.

Now as the nights are getting a little cooler (ok, well last night I noticed a slight, almost refreshing edge to the air) the tourists are coming back in force and filling the ancient streets once again with their funny and foolish ways.

The ticket inspectors are out too on most of the main line bus routes. So tourists entering Rome - BEWARE. Please buy and validate your tickets or you will get fined! The other day I had inspectors on each of my four buses I was taking around town and it was so funny to listen to the poor unsuspecting ticketless people try and talk their way out of the situation.

One woman tried to convince them she did not speak very good Italian, and in her stress about getting fined she forgot she did not speak Italian and came out with a fluent insult of every curse under the Italian sun.

Don't try to jump off the bus at the next stop either. I have seen that happen many a time and they'll just jump off and chase after you!

Here are some more shots of Random Rome: 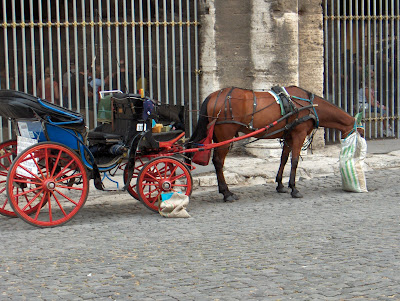 On Sundays the road by the Colosseum is closed to traffic but I still find it funny that people use the zebra crossing even when there are no cars! 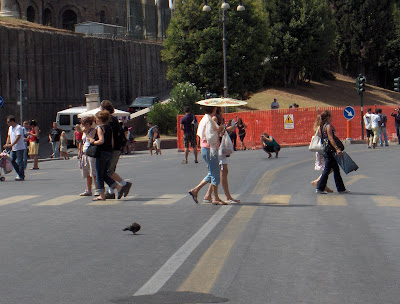 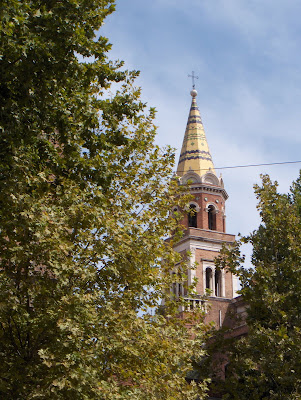 There are shrines to the Madonna all over Italy. Some are behind bars: 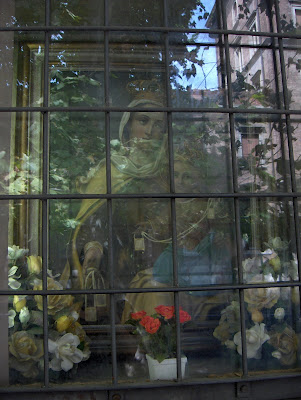 And some are out in the open: 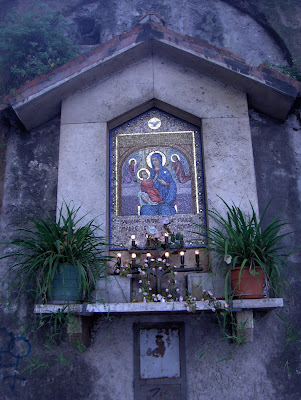 Posted by Leanne was in Italy now in Australia at Thursday, August 28, 2008

I never managed to figure out when the low tourist seasons were in Rome. I usually realised only when all the tourists were back that there had been fewer of them for a while.

Hi Red,
How funny! I don't imagine there is really a similar tourist situation in L.A - well sure people visit but I don't know if there is a real low and high season there.

Getaway had a special on Italy last night and Rome looked absolutely crazy packed with tourists. Is there anytime other than the dead of winter when it isn't packed or is it only bad around touristy spots? Not sure how anyone can enjoy being surrounded by that many tourists.

Rome always has tourists however November is a good month tourist wise. They are all staying at home waiting for the Xmas holidays so Rome is quite nice during this time. Also in February and March.

Just depends on the weather. The worst months are May, June, July, August and September, around Xmas and NY which is really the nicest times to come, but the most busy!

In May and June even July it was horrible to go out as there were millions of tourists. I couldn't breathe!

I cannot wait until November. ha

Okay I noticed that there seems to be more ticket inspectors lately.

The other day one sang to me as he looked at my ticket.

Hi NYC,
How nice you have singing ticket inspectors. There are heaps of them around at the moment - at least some seem cheerful!