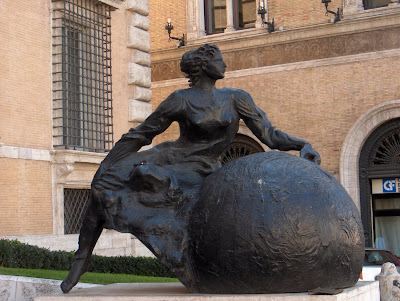 Finally autumn it seems has come to Rome. Only the other week I thought I could not go on with this heat and humidity. It had been so hot for so very long. The other day however the rain started and since then it has been so very pleasant in Rome! Yesterday I feared summer would be back as the sun was shining a little too brightly for my liking, but today mother nature has done me proud and has made the skies grey and overcast.

Don't get me wrong. I love summer. I do not however love summer in a big city such as Rome. Or maybe it is that I no longer love Rome.

Rome was the first place I lived in Italy when I moved here in 2006 and it was like a dream come true. I had always wanted to live in Rome, and here I was - a 27 year old girl living in Rome, Italy! I had a great job, the job supplied the apartment and I met the bel ragazzo a few months after arriving. Life was great. I would happily wander the streets day and night and never got sick of seeing the Colosseum, Trevi Fountain and other such sites. Rome was simply the most beautiful city I had ever seen and I wanted to stay for ever...

The next year although I loved Rome I asked work to transfer me to Sicily. Deep inside of me there had always been this 'pull' towards Sicily but I don't know why...I have no Sicilian blood, I had briefly visited Taormina, Palermo and Lipari a few years before but although impressed they were no more beautiful then other cities and towns I had visited. I cannot explain it, but I just felt that I had to live in Sicily and it was as if fate was leading the way.

As you may know from reading past blog entries we have to request 3 places we wish to be placed and then wait and see if we get our choices. I had requested Sicily as my number one spot with South Sardinia as number two. My manger called and told me I had been given South Sarinidia and would I accept? I did not want to go to South Sardinia but I could not say no as I had written that as my second request. So I accepted.

To cut a long story short I was given Sardinia but ended up getting Sicly in the end.

Speaking your mind comes in handy sometimes. I always speak my mind, to such an extent that sometimes it may not always work in my favour but in this instance fate was on my side.

Once I set foot in the picturesque Taormina, poor little Rome was left behind like an unwanted lover. Rome was no longer the most beautiful place I had seen, Rome no longer even entered my thoughts as now I had found my new love - Sicily.

Due to circumstances beyond my control (a.k.a wanting to be with the bel ragazzo) I turned down the offer to return to Sicily this year. Bel ragazzo had left his job to be with me, so I left Sicily to be with him and we thought of making a new life together in Rome... Fate once again stepped in and got him a job working with my company so hopefully, fingers crossed we can return to Sicily together this time.
Posted by Leanne was in Italy now in Australia at Friday, September 19, 2008

If you don't mind me asking, what is your job there in Italy? I keep trying to convince my husband to move to Italy but he just won't b/c he fears he won't be able to get a job.

If you click on the link above in the post 'Life was great' I have written some posts about my move to Italy which you may find interesting.
I mention how I actually got my job when I was living in London and I work for a large UK tour operator, currently for the Italian specialist division basically looking after all aspects of the guests stay when they are here in Rome. It can be hard to find a job in Italy - your husband it correct, but it depends what sort of work you are looking for, where you are looking for the work, if you legally are allowed to work here and if you speak the language.

Best of luck with it! Let me know if you have a more specific question.

I was wondering the same thing as maria. Where are originally from? I am looking to move to Spain within the next year and a half and I am trying to figure out how long it takes to get a work visa.

btw, i found a new travel site you might enjoy, baraaza.com.

Hope you don't mind, someone tagged me so I've tagged you. Details are on my post Tag, I'm it

Hi Melissa,
I this is the second comment with this strange website recommendation. Spam maybe? I am not sure...

Hi Jewel,
My first tag! I'll pop over now and see what you've tagged me for.

Sometimes change is a good thing. I move my furniture all the time; I go up and down from Luxembourg to Italy (and now the Uk) because I need a break with routine and I like to see things through fresh eyes. You are lucky that you can do the same with your job and take your bel ragazzo with you !

Ohhhhhh Girl I hope you guys get Sicily

Hi Scintilla,
Change is a good thing, you are right. And I really like it that you move your furniture around all the time. Something so small can make such a difference!

Hi Tanny,
We hope to get Sicily too, or at least get out of Rome.