Whilst I was away enjoying a relaxing weekend in Perth, the state of Victoria was engulfed in still burning bush fires. The death toll has reached 173 people, with many more still in hospital in life threatening conditions. Sadly the death toll is on the rise with many people still unaccounted for. And the worst thing is that the police are on the hunt for the suspected arsonists who started such a tragedy.

Whole towns have been wiped out. Marysville is one such town not far from Melbourne. We went there in secondary school for school camps. The town has all but been burnt to the ground.

News story: This is an aerial photo of all that is left of this town. Bendigo is another town close to Melbourne which has been hit by bush fires. My twin sisters husbands family live on their farm in Bendigo but thankfully they were on the other side of the town and were not affected.

The problem was that some towns had no warning and the call for evacuation came to late. People have been describing the bush fires as a hurricane of burning wind, sweeping through so fast that no one stood a chance of getting out. The weather conditions were so hot (45 degrees and above throughout the state) and the wind was so powerful that fires were jumping over roads and with lighting speed taking everything in its path. 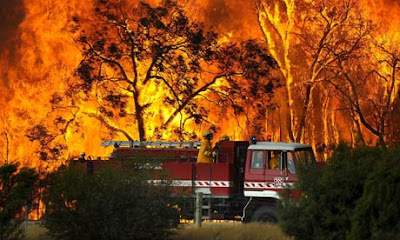 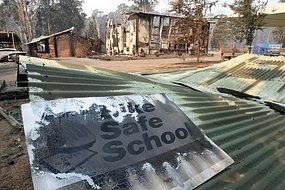 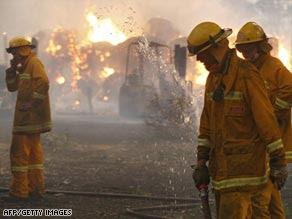 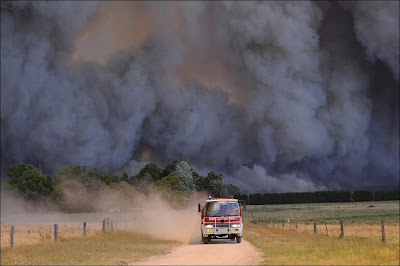 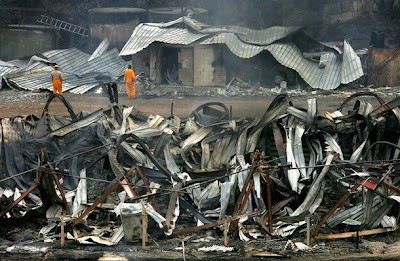 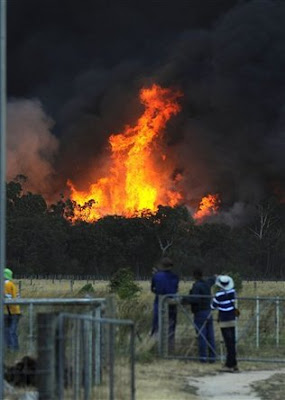 Posted by Leanne was in Italy now in Australia at Tuesday, February 10, 2009

I've heard of it, it's terrible. I hope it will get better soon...

I've been wondering how you and your family were making out. Glad to hear you are okay and will pray for those that are not.

It's so sad reading all the stories and watching the videos :-(

This is so sad. I really hope the situation improves asap.

I have family over there, but they have been in touch and are ok, thank goodness. I have a cousin and his family living in the Otway Forest, I am not sure where that is, but I do know that they are ok. :-)

It's appalling to hear of this happening and those poor people with family and friends affected.
I remember Marysville as a beautiful green oasis from my school camps too.

My heart goes out to everyone there - such a tragedy.

Hi BC,
The fires are still burning so all we can do is hope the stop soon...

Hi Gil,
Thanks for the thoughts! Luckily I am fine but there are still so many unaccounted for people.

Hi Andrea
It really is sad hearing all the stories. Today the youngest victim was an 8 month old baby.

Hi Carla,
We all hope the situation improves asap...but it's not changed at all. Just getting worse by the sounds of it.

Hi Anne in Oxfordshire said...
So very sad..indeed. I am so happy your family over here is safe and sound.

Hi Scintilla,
so you remember Marysville too.. There were fires in Ivanhoe today...they seem to be moving in land.

Hi MissB ,
Thanks for the comments, all the thoughts and prayers are appreciated. x