The bush fires are still burning throughout the state of Victoria with the strong winds not letting up. A report states "...that as many as 200 new fires were started yesterday and 31 blazes are still active across the state." The weather has cooled down (from the top of 47 degrees reached on Saturday) to temperatures being in the low to mid 20s these past few days but the wind is so strong that it is pushing fires along at such a tremendous speed that people are not getting out in time.

On Saturday the fire was moving at about 120kms per hour and now there is fear that many of the fires will merge to make a huge fire wall. Each day more towns are being warned that they may be the next in the firing line, and are all on alert. 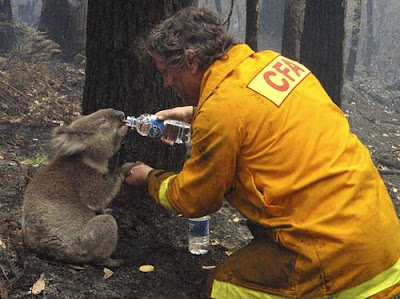 Onto brighter things (if that is possible) you have probably all seen this photo of Sam the poor little koala who was rescued by a firefighter called David Tree. Koalas are not the most social of creatures, and with their two thumbs (yes they have not one but two thumbs on their paws) they will normally scratch anyone close enough to touch them. Another interesting fact is that koalas very rarely drink water...so you can just imagine how scared and dehydrated little Sam was to gently hold the firefighters hand while drinking from his water bottle.

Sam has suffered 2nd and 3rd degree burns to her paws and today she was reunited with the firefighter who saved her life.
Posted by Leanne was in Italy now in Australia at Thursday, February 12, 2009

Thanks for sharing that amazing story. Hope the air quality isn't too bad where you are.

Hi Deb,
The air quality is ok where I am however the smell of smoke is in the air even here in the city.

This story has become a sensation here and it is good to see something sorta positive out of all this. That koala is just precious...I did hear this morning on the news that they a suspected arsonist was arrested...

Hi Carla,
Yes one of the arsonists has been arrested. It is just horrible that someone could do that sort of thing on purpose.

Saw this pic on the news, I think I heard the entire news room say "Awwww". I love Koalas.

Hi Lala,
I love koalas too and Sam is everywhere now. She is one famous koala!