I am still here in the almost always sunny Canary Island of Fuerteventura!

This seems to be an island where people love taking off there clothes. You see them boldly stride along the beach with their private parts swaying with the breeze. No one bats an eye at the nudists here...there are so many that it would be hard to avoid them. I am not sure how I feel about the issue of nudism on the beach. I think there should be certain areas where you can bare all, but I don't really think people should just walk around with their goods on display for the world to see...or am I just being prude? I mean - if there are children around, shouldn't you put your private parts away?

People here also enjoy to walk around semi-naked even though it is technically winter. I know that 25 degrees is hot for some, but do the tourists really need to walk around with their tops off? The main streets are full of mostly old, white haired men with bright lobster red pot bellies on display. The normally well endowed wives walk around the streets with just bathers or something very flimsy trying to cover them up. The other day there was a woman we saw walk into the supermarket with her bikin bottoms on and a singlet top. Not even a skirt or shorts to cover up! I think this is a little much. The majority of people walk around like this. Topless...topless...and a bit more topless. They eat in cafes like that, they are dressed like that even in the morning when it is not even that hot! In Taormina, Sicily some of the tourists used to do the same but every now and then there were police to caution them to 're-dress.'

Anyway, enough about clothes or lack there of. Here are some pictures from an island excursion we went on. Bel ragazzo and I visited was the old capital called Betancuria. It is smack bang in the middle of the island and the capital has long since been moved to another port town. The town is however very cute and quaint if you visit the island well worth a trip. 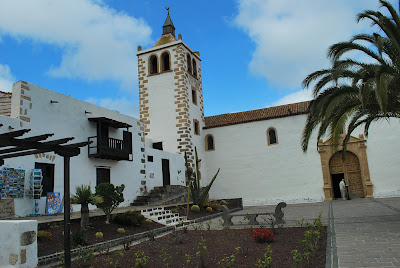 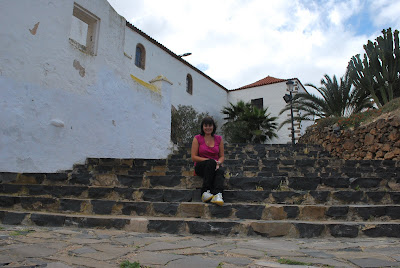 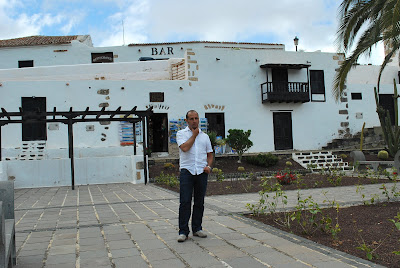 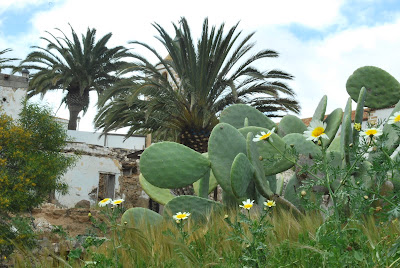 We have also been to a fantastic beach area called El Castillo. It most probably will not be on a tour guides list of places to see, but we drove there independently a few times to spend some relaxing time on the beach. 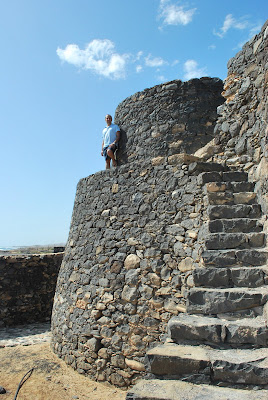 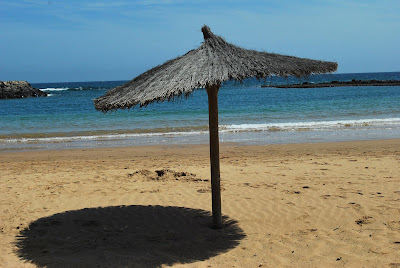 More photos to come!
Posted by Leanne was in Italy now in Australia at Tuesday, March 17, 2009

The pictures are beautiful...it looks like you are really enjoying yourself! :) Yay!!!

Bel fotos! I'm with you on the beach nudity - sometimes its better left to the mysteries of the mind! Last summer I was in a health food store and a woman was shopping in her bikini! Maybe I'm a prude too as I found it to be inappropriate.

Could you picture women sitting topless at the cafes down Swanston Street or maybe Fitzroy St in St Kilda? I think if you wouldn't do it in your own home town and the locals aren't doing it then you probably shouldn't. Maybe on the beach is okay or if you're in Ibiza where anything goes but at a supermarket?

Maybe I'm just turning into a prude in my old age, I have to fight the urge to tell the young kids that their pants have fallen down and their underwear is showing.

Hi Ms Violetta,
I am glad I am not the only prudish one out there...and I cannot believe you had someone come into your health food shop with a bikini on...that is just crazy!

Hi Jewel,
If someone tried to take their top off on Swantson St they'd probably be...well I don't know since they just would not do it. And you are so right. The locals DO NOT take their clothes off so why should all the foreigners do it. If it was the way to dress in this country then good on the foreigners for trying to 'fit in' but all they are doing is sticking out like a sore thumb!