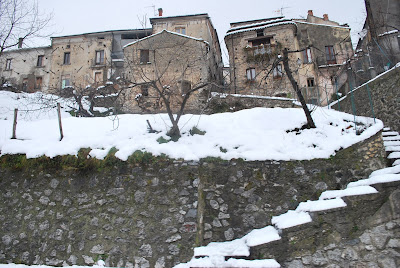 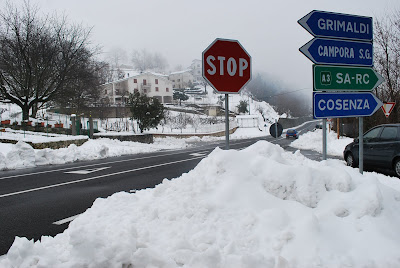 Work was cancelled on Saturday due to excessive amounts of snow trapping people in their towns. The roads had frozen over around here, and unless you had a 4x4 then you were not going to get very far. Luckily for us bel fidanzato's cousin has such a car, so he took us for a drive up further into the mountains. It was cold, freezing actually but so, so pretty! 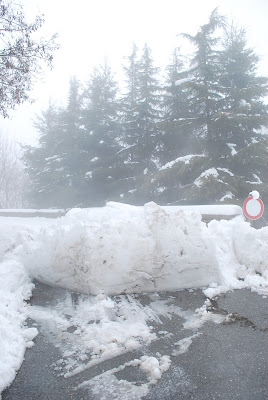 The snow has finally stopped falling here in Malito, although there is still a lot of snow in the village. Yesterday we feared that the snow would never end as a freak snowstorm started as we were transporting wood from the car to the apartment. Our apartment is up near one of the old churches so we cannot park the car out the front. Sometimes bel fidanzato can drive up and leave the car briefly behind the church, but the road up is not a real road and it's steep so was covered with ice and snow.

Whilst it was snowing down freezing cold pellets of ice, I was standing by the car, with my feet ankle deep in icy, cold, melting snow, holding a giant umbrella with one hand, and trying to load wood into a box with the other. It was windy, the wood was heavy and I now know what it feels like to loose feeling in your hands and feet. I honestly thought I would get pneumonia in those few minutes I was outside.

Poor bel fidanzato made 3 trips back and forth, up the steep, icy path, without an umbrella whilst his poor foreign partner just looked on in cold disbelief. I really did want to be helpful, but it was just too cold to move!

Thankfully as I said, the snow has stopped and I was able to get to work today! Hopefully these will be the last photos I post of the snow in Malito. If the sun comes out I can begin my walking tour through town! 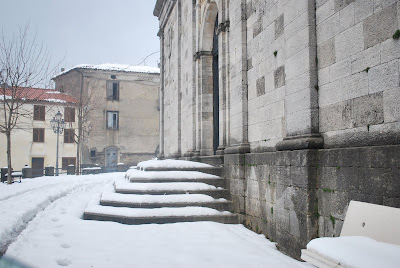 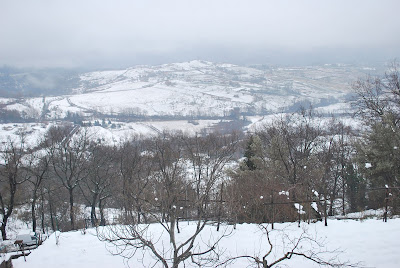 Posted by Leanne was in Italy now in Australia at Monday, February 15, 2010

Those are beautiful pictures, Leanne. We didn't get ANY of that down here in Catanzaro. :-(

Are your family and friends in Australia surprised that in Italy it is possible to have such a harsh winter?

The snow looks so gorgeous, but I can understand how it would get really frustrating rather quickly. I was pleased that we only got sleet the other day. The kids weren't, they would have liked school to have been cancelled.

Hi Glenda,
Some photos of our place will come very soon! The apartment is a bit of a mess at the moment so cannot be showing you all that!

Hi Cherrye at My Bella Vita,
You could have gladly had some of our snow. We had more then enough!

Hi LindyLouMac,
It's not that my family and friends are surprised at the harsh weather - I am too!!!

Hi Cathy,
I bet the kids would have liked school to be cancelled. It got cancelled around these parts.

Love it. Thanks so much for all the great photos and sharing your stories with us.

Hi,
I've just come across your blog via Facebook and have very much enjoyed reading it.
I'm amazed at your snow since you are not far away from us - we are in Belvedere Marittimo.
Lesley

Hi Lesley.
You are on the coast so missed all of the snow that we had up here in the moutains. We are so close...yet so far!