More of my knitting

Knit, purl, stockinette, reverse stockinette, cast off, bind...k2tog, p2tog, yo, pwise - it's not Arabic, although sometimes it feels like it - it's knitting. If I understand the pattern, if I can translate the k2tog into knit two stitched together, then find it relaxing to knit...most of the time. When I make a mistake and realise 10 rows later, when I try to work backwards and cancel the worked rows, and end up making a big, fat, horrible mess then knitting makes me angry...but as of late I have been doing a bit of relaxing knitting.
You may recall that I am knitting the baby a jumper. Thanks to bel fidanzato's mums help, we have finished the back and I am onto the front! This is how it looks so far: 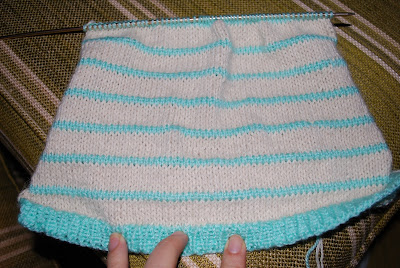 If you look at my other post, you'll see that the back is all green. I am making the front and the sleeves two toned - not to be all fancy, but because I obviously did not think of the quantity of wool I would need when I began to knit. I bought 1 ball of this lovely greenish wool in Scotland and assumed it would be big enough to knit a jumper....but it's not so bel fidanzato's mum taught me to work with two colours and I am pleased with how it's coming along.
I also made the baby some play woolen cubes the other. When my twin told me 8 months ago that she was pregnant, not only did I want to start trying for a baby of my own, I decided to hand make it something special. This was when I actually restarted to knit. At that stage bel fidanzato's mum tried to teach me how to knit booties, but it was just too complicated for me. I was making enough mistakes with the plain old knit stich, so I decided to knit a blanket by having small squares of different colours. The blanket took me forever, the squares were all different shapes, they were wonky, full of mistakes and holes when I had dropped stiches and was not at all special, but rather quite crude. I couldn't possibly give it to my twin as a gift as she surely would not use it....and if she was kind enough to use it, she'd probaly have to tell friends that a child had made it!
So I kept the blanket, but could not throw it away after all the time I'd wasted not really perfecting my knitting skills. I then found out I was pregnant, and as my pregnancy progressed my ability to knit progressed too. The other week I was searching the internet for hand made toys and came across a simple cloth cube, and thought - why not take my blanket apart and make some woolen cubes! Don't look too close as you can see they are wonky, but baby isn't going to care. They are very soft which is the most important thing. I sewed A B C D on one cube and am not sure if I'll sew letters, numbers or maybe shapes on the other two, or if I'll leave them blank. 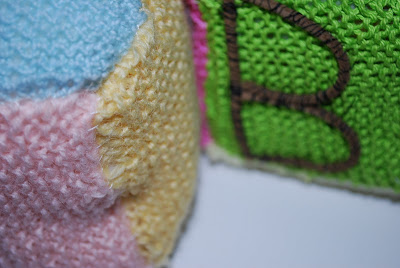 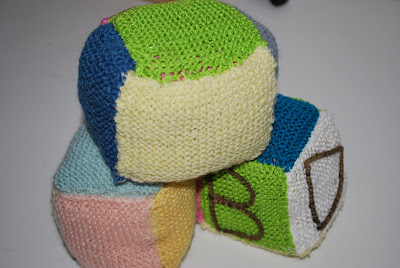 Posted by Leanne was in Italy now in Australia at Sunday, November 07, 2010

What a great idea - I love the knitted cubes! And well done you for actually knitting a jumper - I've not managed to actually follow a complete pattern yet. My mother-in-law bought me a lot of knitting patterns the other day but problem is they're all in Italian! I was just getting to grips with the English instructions and now I'm back to square one.
My mother-in-law is also teaching me to crochet. I now know ow to crochet in Italian! I know all the names of the stitches in Italian but no idea in English!
I'm looking forward to seeing the finished jumper and looking forward even more to seeing it on baby!
Hugs x x

Your work is beautiful!

Well done Leanne. I particularly love the knitted cubes. I too can't wait to see the finished jumper.

Wow, I love those blocks. what a great idea to use up small quantities of yarn!

This is wonderfully decorative! And when he's older he'll use them for throwing as ball games in the house :)

Hi Sarah,
You couls knit a jumper as this patter is (for the most part) easy, just the knit and purl stich which is why I am making it. Can;t believe you have been taught to crochet! I want to learn that after knitting, but it seems so complex that I don't think i am ready for it.

Hi Gil,
Thanks :) I wouldn't speak too soon though as it may turn into a disater soon since I'm running out of green wool and have 2 sleeves to do!!!

Hi Cathy,
I'm happy with the cubes too, the came up well - not perfect, but well :)

Hi Jen and Rich Johnson,
Thanks for stopping by my blog, and I'm glad you like the cubes.

Hi Scintilla,
I'm sure when he's older he'll throw them at me!