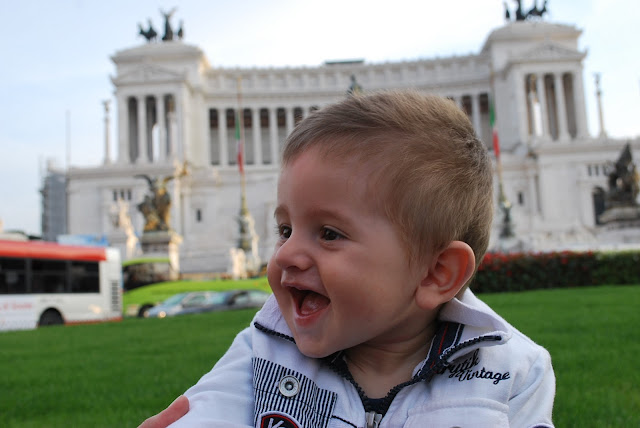 We went to Rome for the long weekend. We had to appear in person to apply for bel bambino's Australian passport and used this as an excuse for a mini holiday. It was lovely to visit Rome again, we stayed at the hotel where we met and visited our friends. It was lovely yes, but reinforced the notion that never in our lives do we want to live in Rome with a baby.


When you've lived in Rome like we have and seen it inside out then you don't see the splendour of the Colosseum, rather you see how dirty and dark it is. The Trevi Fountain, always my favourite place, was full of beggars and foreigners harassing us to buy flowers. We didn't go and visit all the sites this time, there was no need. I was last in Rome for a weekend in 2009 and so much has changed or maybe there is so much I have forgotten. The city is dirty, really dirty and there are foreigners galore. Now I am a foreigner so don't go thinking I am racist but I was surprised by just how many foreigners there were. We heard stories that a lot of jobs are being given to foreigners and not Italians since they will accept low wages and poorer conditions.
We got the tram one evening to visit a friend's wine bar. When the tram came it was so full that we had to walk back 3 stops to the start to try and get on with bel bambino's pram. We finally got on and were crushed like sardines while we tried to protect bel bambino from being squashed. If this experience wasn't bad enough, half way there the tram stops and people start getting out. The driver didn't make an announcement, we had no idea what was going on until we learnt that there was a protest down the way and the lines were blocked. A day doesn't go by when there isn't a protest in Rome, but this was about 6pm at night.
Tram after tram were pulling up and spilling out the commuters. It is not as if they thought to notify people before getting on the tram or that they thought of suspending them all together. Instead they sent one bus, one normal bus which is one third of the size of the tram. We didn't even attempt to board as with a sleeping bel bambino it would have been impossible. Finally another bus came and we asked to board before the mad crazed commuters. Permission granted, a warning given to be careful of the mad rush and then the onslaught began. After people being pushed out onto the street and us shoving people away from bel bambino the bus left. Amidst 2 gypsies fighting, the over powering stench of way too many sweaty people in a small space we made it to our friends and the haven of the wine bar. 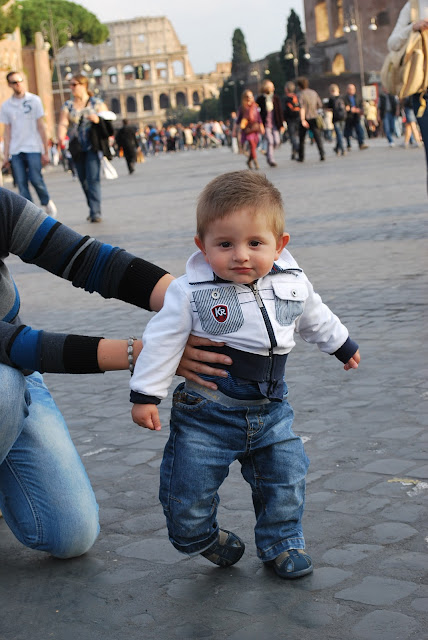 We really want to go and live in Australia. We cannot think of raising our son here anymore.
Posted by Leanne was in Italy now in Australia at Sunday, November 06, 2011

Good luck with all the paperwork. Bel Bambino will love it in Australia. (from a Kiwi nonna in Italy with a bella bambina in Australia).

(Rome is madness, you were brave to even try!)

I live in America and agree with you that Rome does sound like a mess. I could never raise a family there. However, I have lived and spent a lot of time in several medium-sized cities in Northern Italy (Veneto and Friuli)and it really is a completely different world from what you describe as life in Calabria. I have found the people very honest and friendly and the standard of living quite high, even compared to the U.S. My question is: Did you ever think of moving to Northern Italy, which combines the economic opportunity and efficiency of many northern European/North American countries with a great quality of life and culture? I cannot speak highly enough of the people and the lifestyle which I experienced.

Hi my friend, back from my travels and trying to catch up with all my favourite bloggers. I also think Roma has changed but then so has Italy, very different to when we first arrived in 2004, catching up with the rest of Europe I suppose. It sounds as though you have some tough decision making ahead of you Leanne.

You have quite the handsome young man there, he is so growing fast! Good luck with the bureaucracy....

Bel bambino is a gorgeous little boy! They grow so fast. My son also has an Australian citizenship certificate by descent. I'm sure your application will come through Leanne. We applied as well after we had been married, and all went well. My husband is now an Australian citizen as well. Although we have come back to Italy, but who knows what the future holds.

hi Anonymous
north italy does have more job oppourtunities but it's still italy which is not a good place to live in at the moment, north or south!

hi LindyLouMac,
you are spot on that rome and italy has changed so much.

hi Cathy Powell
so you were in my shoes before, hope we will be lucky like you!