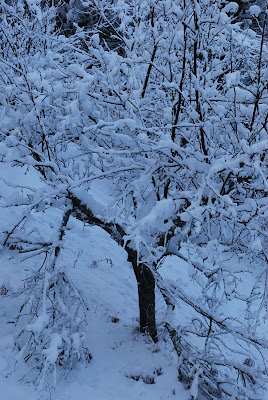 It's still snowing in Malito, and for that matter most of Italy. Bel fidanzato and I went for a glass (or two) of prosecco earlier, in one of the two bars in town, and it was not snowing, but hailing massive (rather painful) balls of ice. I estimate that today it has snowed about 30cm which may seem like nothing to you readers, but to me - a mere Australian living in Calabria - this is a lot of snow! My new boss just sent me a text message saying there will be no work tomorrow as she too is snowed-in in her village...so less money this week but more time to fix up the new apartment.

Here are a few random pics from the apartment and more of the snow. Bel fidanzato and I are very lucky as the apartment was left to his mother in a will...so we get to live in this beautiful (albeit cold) apartment until we do up a house of our own. No one has lived in the apartment for a while, and even when someone lived here it was only in the summer months. Bel fidanzato has taught me how to light the open fire (I am not so good at the moment...it seems to keep dying on me!)but he says that I will not have to go and chop the wood - even though I offered!

This is the entrance to Malito: 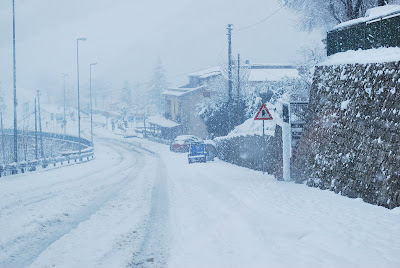 This is a tree that is about to collapse under the weight of the snow: 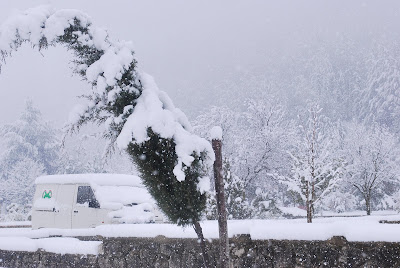 This is me on the steps of one of the churches, which is the part of town in which we live. 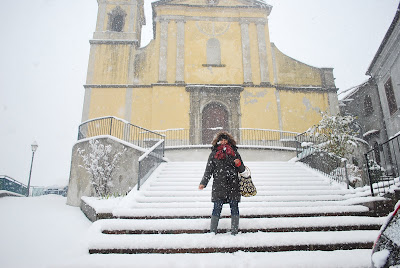 This is my balcony (not terribly exciting, but my family does read this blog and they want photos of the new aparment!) 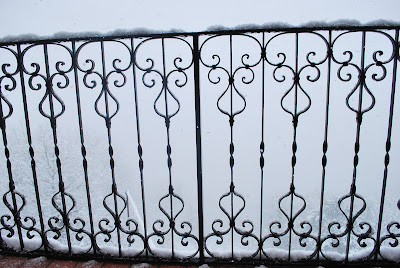 The apartment was left pretty much fully furnished. The relative who passed away had good taste and decorated the aparment with lots of unique bits and pieces. This is the wall in the hallway which is covered with old keys. Ever since moving to Italy I have loved the giant, heavy, old keys and now I have a wall full of them! 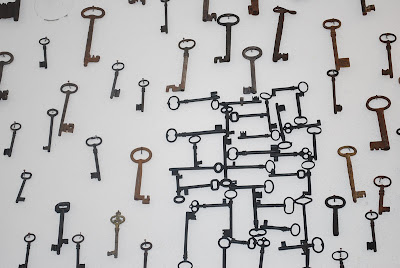 This is bel fidanzato getting the fire started: 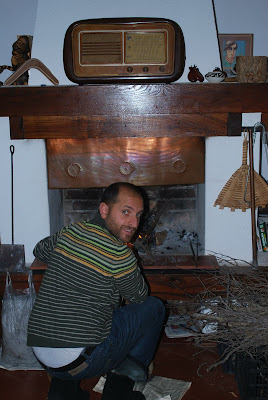 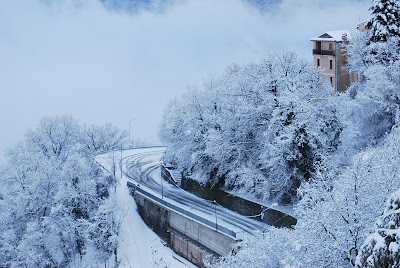 I also have a tip for those of you out there, who like me find yourselves in a snowing country with less then adequate footwear. Bel fidanzato, his brother and nearly all the men over the age of 28 wear their old national service boots when it snows. I guess having to do military service used to have some perks...even though my foot is the same size as the bel fidanzato's however, I do not want to wear his boots (they are water proof yes but so cold!)

Bel fidanzato's brother taught me an easy way to make my boots sort of water-proof - well actually he showed me how not to get my socks wet. Over my socks (or 1 pair of thick stockings, 1 pair of thick leggins and 1 pair of hand woven woolen socks in my case) you need to put a plastic bag, then put your boots on. I thought bel fidanzato's brother was joking at first...but low and behold he was not only telling the truth, but has now turned me into a fan of plastic bags in the boots!
Posted by Leanne was in Italy now in Australia at Saturday, February 13, 2010

Get some Doc Martens, they are perfect for venturing out into the snow :)

Ahh...yes Andrea - so they would be. I used to love docs when i was younger, and never thought to get a pair as that is just what those military boots are like!

Snow with the right clothes and most important footwear is so much more enjoyable.

Hi Lindy,
Snow would be SO much more enjoyable with good shoes. Even the plastic bag in the shoe thing is not working that well anymore!